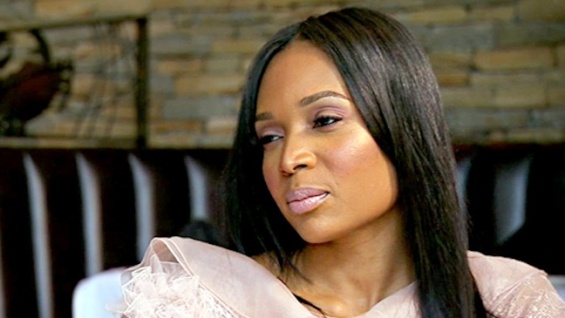 Most arrested member of “The Real Housewives of Atlanta,” Marlo Hampton, hosts a gay event on Saturday as she continues her apology tour for dishing an anti-gay slur during a recent episode of the show.

So she’s hosting the Labels Party on Saturday at XS Ultra Lounge. “Forgive her? Or forget her? U decide,” the Facebook invitation states.

Hampton found herself in a bit of trouble recently when, in the heat of yet another passionate argument over nothing on the reality show, yelled this at Sheree Whitfield: “That’s why you don’t have a man. Go hang with the faggots, you ugly stupid ass.”

With all of the gay friends she claims to have, plus the gay sidekicks on the show, you’d think Hampton knew better. Kandi Burruss, who recently discussed her gay fans, offered this takedown: “I don’t know etiquette but I know you’re not supposed to say that.”

Hampton quickly apologized after the show aired. She tried again, too.

I feel absolutely awful. When I said the “f-word,” this wasn’t on camera, but I was crying, I was so pissed off and frustrated. I called home to Daniel, my assistant who’s gay. I just told him about the whole thing about Sheree, I mean, I just felt awful, I mean, I was upset like that whole night. Daniel’s gay, my sister’s gay, you know, my whole circle is. It’s like, wow, but the only thing about it, when I talked to Lawrence about it, he told me a “faggot” was a gay messy male. And I did know that guy was being messy, but he’s like “Marlo, you cannot say that, though, you’re not gay. It’s like a man calling you the B-word.”

So, I mean, when it really, really hit me also is when I saw Twitter and the people going off at me. Some people were like, “How can you dare do this? What I went through…” It just touched me, like it really messed me up, seriously. I’m like, “Wow, keep your big mouth closed and think before you speak Marlo.” But it really did hurt me, and I did apologize, my friends love me and they know I was just talking, and I’m just trying to build that relationship back with the gay community, because, I mean that was awful, I really feel bad about that.

She’ll get another chance on Saturday.