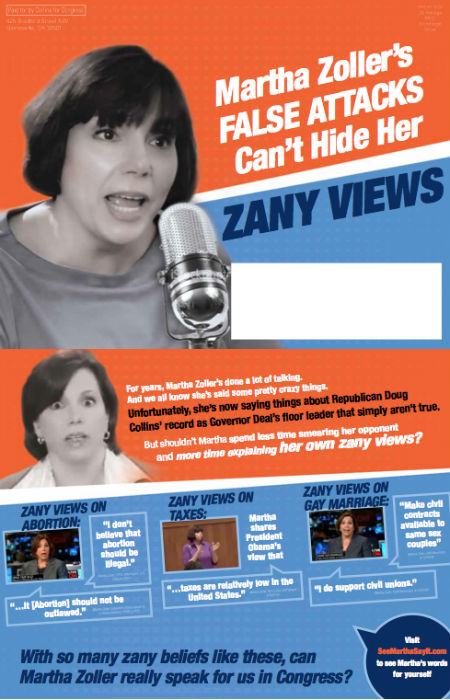 Two conservatives in a north Georgia congressional district are slugging it out to prove who is zanier. Guess what’s in their crosshairs? Yep, gay marriage. You know, because this state is so progressive that it’s on the precipice of endorsing same-sex unions. Not really. But the way Doug Collins is slamming Martha Zoller on the issue, you’d think the gays in Georgia’s 9th Congressional District are storming the courthouse demanding marriage licenses. Zoller, for her part, is trotting out Herman Cain and his anti-gay express to prove that she’s not in favor of gay nuptials. The contrived gay marriage flap surfaced last week when Collins, a current state representative from District 27 in Gainesville, unleashed a new mailer attacking Zoller and her “zany views” on abortion, taxes and gay marriage. The mailer (image above) first surfaced in the Georgia Tipsheet and attacks Zoller for supporting civil unions. That's the site run by James Richardson, the gay-friendly Republican that Creative Loafing gay married last month. A microsite from the Collins campaign, See Martha Say It, delves even further, offering up quotes Zoller gave to media outlets on the issue. “I don’t advocate same-sex marriage. I have not changed my view on it. I do support civil unions, though. It’s a legal issue,” she tells CNN gay Don Lemon in a 2009 interview. But let’s not get too excited that Zoller, a conservative radio talk show host, backs civil unions. Or at least she did before she ran for public office. She makes clear with her microsite, Collins Lies, where she stands on the gay stuff.

Collins Lie #2: Martha Supports Gay Marriage or Civil Unions THE TRUTH: A consistent and courageous social conservative, Martha Zoller strongly supports a Federal Marriage Amendment, which will stop the liberal court system from twisting the U.S. Constitution to force States to allow homosexuals to marry. Marriage is unquestionably between one man and one woman and should be protected by our Constitution – NOT undermined by it. Traditional marriage is the cornerstone of our civilization. In Congress, Martha Zoller will fight tirelessly to preserve the scared union of marriage and defend our Constitution from the vicious attacks of activist judges and the liberal left.

Zoller and Collins are the biggest names in the three-way campaign for the open seat, which was redrawn last year by Republicans looking to craft a race just like this. The winner of the July 31 primary faces Jody Cooley, a Democrat, lawyer and soon-to-be sacrificial lamb. Zoller and Collins should take a deep breath and find some time this week to see “Headwaters: Didja Hear?” It’s a play about some uppity gay kids in White County, which sits right smack dab in the 9th District they hope to soon represent. The gays really do live in north Georgia.