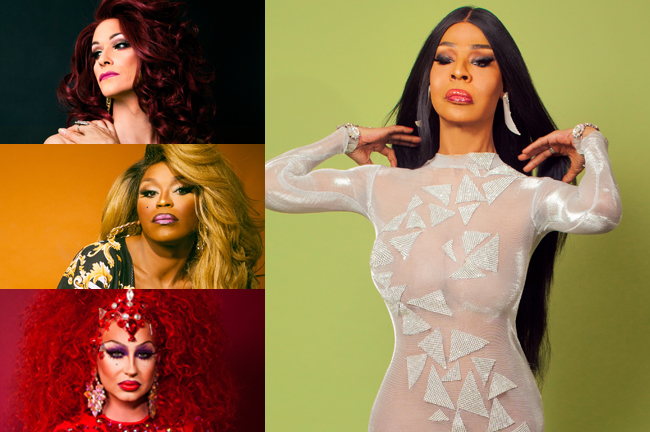 “There isn't a drag show in the city of Atlanta that you cannot see the influence of Shawnna or the House of Brooks in some way, shape or form.”

In the era of shows like Pose and RuPaul’s Drag Race, drag houses have come into the limelightj, but it’s a gag-worthy subculture that has long highlighted themes of gender, race, family-of-choice and sexual orientation.

Atlanta’s own scene is home to a few legendary drag mothers, including the one and only Shawnna Brooks, a timeless artist and the original dancing diva.

The mother-in-the-making began her renowned career in Fayetteville, N.C., in 1989, Brooks tells Q.

“I performed in a talent show and was immediately hooked,” she says. “The adrenaline from the crowd was intoxicating.”

From there, a star was born.

Shawnna moved to Atlanta not long after that first performance and began her journey to become the trans icon and drag staple that she is today. Shawnna worked the club scene and the pageant circuit, even snatching Miss National 1999, the proudest moment of her career because her own mom was there to see her claim her spotlight.

As her career progressed and her experience grew, another rhinestone was destined to be added to her corset, so to speak.

“The House of Brooks was roughly founded some 20 years ago,” Brooks says. “I didn’t plan on starting a house or being a mother to anyone. Yet, certain special girls looked up to me and were inspired by what I was doing. So, I thought, ‘Let’s see what they got.’”

Shawnna saw characteristics within each of her protégés that she reveres within herself. She doesn’t hesitate to list the traits that define the girls of the House of Brooks.

“The qualities I see in each one of my girls are honesty, a kind spirit, talent, the ability to evolve their drag and grow with the times, and most of all passion for the art,” she says. “Without that passion, everyone will not be able to truly appreciate who they are and what they have to offer.”

As shown in photographer Jon Dean’s gorgeous portraits below, Shawnna’s popular-in-their-own-right drag daughters include Destiny Brooks and Nicole Paige Brooks, to name just two. Show runner and RuPaul’s alum Phoenix is a legacy as Nicole’s drag daughter. And those are only the ones in Atlanta; the House of Brooks spans multiple queens in multiple cities.

She isn’t taking on anymore apprentices of her own these days, but Shawnna is still thrilled to be called mother.

“Well, my children know what they're doing, they've learned well,” she says. “I'm too old to have any more kids. I am very grateful that these beautiful people think enough of me to share my last name and carry on my legacy.”

If you haven’t been struck by the power of Shawnna Brooks, you can bask in her fierceness every Friday at Blake’s on the Park. Of course her progeny are in shows all over town on any given night. See what they have to say about Mother Shawnna and her house with their portraits as you turn the page.

When I moved to Atlanta in 1997, I went to Backstreet and saw Charlie Brown's Cabaret. They introduced Shawnnna Brooks, and once I saw her perform I was hooked. I started following her all around the city. Everywhere she performed, I was there.

When I started doing drag about two years later, she took me under her wing and asked me to add her last name, which I did in 2000 on her birthday. I'm her second child. Tara Nicole Brooks is in Wilmington, and then after me I have one more sister, Destiny Brooks.

I have several children which include Angelica D'Paige Brooks, Phoenix, Jazelle, Megan Brooks, Chloe Jordan, and there's a few others. My reason for having drag children was to share all the generosity and knowledge that Shawnna gave to me with as many people as possible. My drag children have had drag kids of their own that include Phoenix's child Alissah Brooks and Jazelle's child Kyra Mora.

We are more than just a drag family. We are all very close friends, and we count on each other in and out of drag for just about everything. There isn't a drag show in the city of Atlanta that you cannot see the influence of Shawnna or the House of Brooks in some way, shape or form, whether it’s one of her children, her grandchildren or one of her friends that she has helped or inspired.

I remember going to Backstreet with Lateasha Shuntell and some friends who told me I needed to see this entertainer named Shawnna Brooks. Long story short, I fell in love with everything I saw on stage. I knew then that whatever or whoever she was, I wanted a piece of it.

Fast forward many years later, I moved to Atlanta, and the rest is history. It took me two years of listening, learning and growing before I got the last name Brooks. I thank God every day for putting such a loving and positive person in my life. Not just as a drag mother, but as a friend who actually cares.

Being a part of her legacy is such a full circle moment and sometimes I have to pinch myself. I remember being a star-struck fan admiring her from the side, to now hanging out, going shopping, having long phone conversations with Shawnna. To me, it's such a dream come true.

If you know Shawnna Brooks, you know she will give you the hair or outfit off her back, I'm sure a lot of people have had on a Shawnna piece. That’s the type of person she is. Kind hearted, funny, and will always be Atlanta’s Original Dancing Diva.

To me, Shawnna Brooks is the epitome of the word “Entertainment.” She exudes stage presence, confidence, fierceness, the look and everything it takes to captivate an audience.

To this day, I’m still just as much mesmerized by her as I was 17 years ago.

The thing that makes Shawnna even more amazing is something that most don’t see.  Behind the glamour, diva persona and spotlight, there’s a human being with truly a heart of gold. There’s never a doubt that if I’m ever in need of anything – and I mean anything, whether its financial, an honest opinion or just a shoulder – she’s there.

We’ve had many talks inspiring each other in our craft and in life, and those are the moments that I’ll keep with me forever and have made me so grateful to have Shawnna as my mentor, co worker, former roommate, but most importantly, my friend.

I love you, Shawnna. Thank you for everything you’ve contributed to my life and to my artistry.

As we’ve seen, the House of Brooks goes on and on. In Atlanta alone, here are just a few fierce faces with direct “granddaughter” and “great-granddaughter” lineage to Shawnna Brooks.

This article originally ran in Q magazine. Read the full issue below, and pick up your hard copy around town each Wednesday.