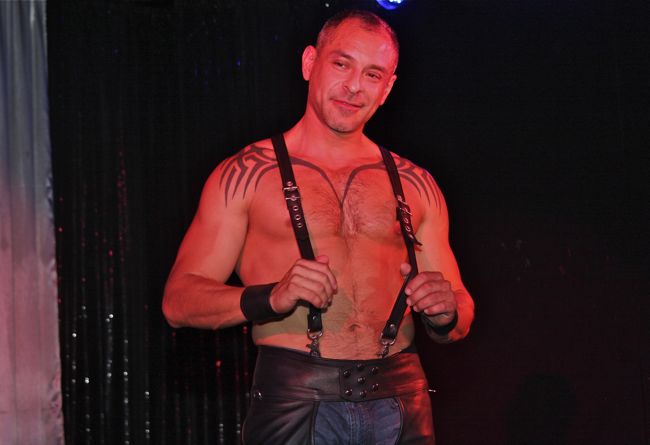 The event, with more than a dozen hunky contestants, also included two entrants wrestling on stage (bottom photo), tips stuffed in places that would make even the hardiest of drag queens blush and enough flesh to please the packed crowd at Jungle.

A panel of drag queen judges — Rapture Divine Cox, Amber Divine and Lucy Bowels, guided by emcee Ruby Redd – narrowed the field to three – Tony Alvarez of the Atlanta Titans, Tom Green of the Atlanta Venom and Griff King of the Wet Demons. But Alvarez (top photo), who hit the stage in chaps and suspenders in one appearance and a knee-length and form-fitting swimsuit in another, won the title.

Alvarez took the crown from Brandon Massello, who captured it during the 2010 contest, which was an event that trended more raunchy than the sexy on display this year.

HSL not only plays softball well, but it knows how to throw a pageant, too. Need more evidence? The league hosted a steamy underwear contest last year as part of its Big Peach Softball Tournament. The play – on the field and off – is again on tap this year as part of the tournament, scheduled for July 1-3.

The league closes out its regular season on June 26 and hosts the Commissioner’s Cup on July 10. On June 24, Mary’s hosts its Jock Night and Hotlanta Softball party.