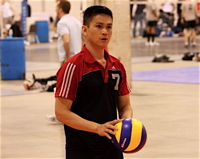 Recreational and advanced players in the Hotlanta Volleyball Association are already smoking up the courts on Tuesdays and Fridays for their fall season of league matches.

“We cater to all types of skill levels, from those who know nothing about volleyball, to those who know something and want to get better, and all the way up to advanced level players,” says HVA President Duc Nguyen (top photo).

Players in this season’s league matches must be HVA members. Open play, in which anyone can try his hand at the game without a membership, is suspended during league play. As soon as each six- to eight- week league season ends, Open Play starts again so coaches can size up skill levels for potential new recruits in the next league season.

Both the recreational and advanced leagues play at the Agnes Scott College gym for the fall season, and spectators are welcome. The next games are scheduled for this Tuesday and Friday.