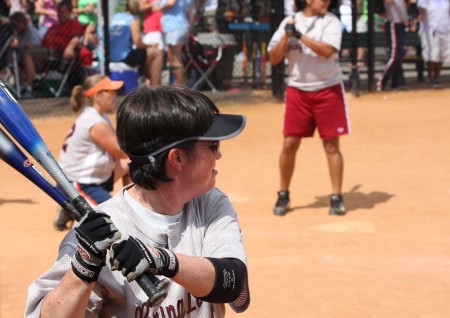 The Hotlanta Softball League played its last full day of competition on Sunday, wrapping up a summer season that opened in early April.

The league is sending several teams to two national championships in late August and September. This is the first year HSL teams will travel to two different tournaments after a national split that
will see men’s teams competing in the North American Gay Amateur Athletic Alliance Gay Softball World Series in Milwaukee from Aug. 30 to Sept. 5 and women’s teams playing in the Amateur Sports Alliance of North America Softball World Series in Madison from Sept. 1-6.

This weekend, the Avengers and Wet Demons will play to break a tie in the Open Division C bracket and earn an automatic berth to Milwaukee. A handful of other spots to the World Series will be won in the Commissioner’s Cup on Sunday.

HSL teams with berths to the World Series include the Venom (A), Mudcats (A), Sluggers (A), Avengers (A) and Sharks (B). D Division teams heading to the championships have not yet been announced by the league. The Venom was among three Atlanta teams that won World Series titles in 2007. The team also won the title in 2004.

Two women’s teams — Gamma and Gamma Lite — will head to the World Series in Madison.

Up next for HSL: The Razors will hold an end of season closing party on Aug. 9.

View the Project Q Atlanta photo album from the games.