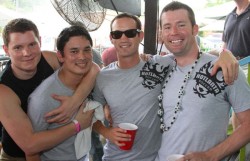 The Hotlanta Soccer Association, sensing it had a good hook with the World Cup and the U.S. team’s first match of the competition, hosted a beer bust fundraiser on Saturday.

Surprisingly, the packed crowd at Frogs Cantina really watched the soccer match — U.S. sports fans tend to favor baseball, football and basketball over fútbol — and enjoyed a competitive U.S. squad notching a tie with the U.K. The gay sports group hoped to raise funds to offset field rental costs and provide scholarships for players. They also debuted their new club T-shirt, which was also up for sale. 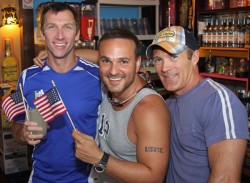 Funds raised at the event “help to alleviate some of the stress that comes along with maintaining the association, playing year round and sometimes sharing entirely too small hotel rooms with too many teammates,” Joe Organ, HSA’s president, told Project Q Atlanta ahead of Saturday’s event.

The event was also one of the first full crowds Frogs saw since three men threw a rock through the front door, climbed in and took three flat-screen televisions.