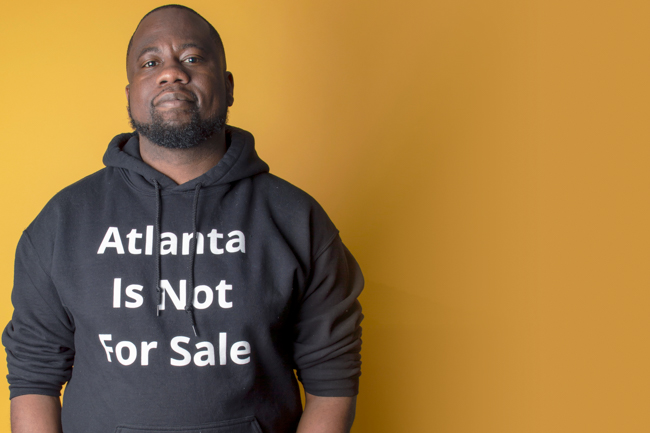 Atlanta poet and community organizer Tony Daniels died almost 20 years ago, but his spirit lives on in a number of local black gay men today.

Charles Stephens, founder and executive director of Atlanta’s Counter Narrative Project (photo), talked with Q about Daniels’ impact and the Feb. 7 event at the Auburn Avenue Research Library set to honor his legacy titled Architect of the Black Gay Mecca.

What is the Counter Narrative Project?

The Counter Narrative Project was founded in 2014 as a love letter to black gay men such as Tony Daniels and his contemporaries. These courageous, brilliant and daring black gay men saved my life, saved so many of our lives, through their writings, their artistry and their activism. I wanted to build not just an organization, but an institution, that was grounded in that legacy and that history.

What is Tony Daniels legacy?

Tony Daniels was a black gay man living with HIV who dared to tell the truth about his life and his experience. He also dared to challenge racism, sexism, homophobia and HIV stigma through his writings and organizing work. His writings, in particular, sought to elevate the dignity and humanity of black gay men, at a time when so many of us were invisible. He was also an early force in providing an intersectional framework for how we think about HIV.

Unfortunately, I never met Tony Daniels. I entered community and movement work in January 1999, when I attended my first My Brothers Keeper meeting, at the Atlanta Lambda Center. Tony had died the previous spring in a car accident.

What I couldn’t fully appreciate then, that I have a better grasp of now, is that when I came into the community, Atlanta was still very much grieving. So many black gay men of that generation died, and Atlanta has failed to honor them. My belief is that the creative energy that fuels this city has everything to do with the contributions of black LGBTQ folk. And [the Architect of the Black Gay Meccaevent] will hopefully be the first of many programs to honor that spirit.

Additionally, so much of HIV and LGBTQ movement history is whitewashed. There are figures like Tony Daniels that were instrumental in advancing HIV and LGBTQ justice in the South that have been completely ignored.  This event corrects that.

What’s the most important lesson you learned from reading Daniels’ work?

I’ve always occupied a unique position in the HIV and LGBTQ rights movement, because I am first and foremost a cultural worker. I believe in the power of culture and storytelling to advance social change and social justice. I believe in the importance of media and narratives to not only change hearts and minds, but to also shift policy. And in Tony Daniels, I see an example of how to do that, how to be all the parts of myself.

The Feb. 7 event officially opens Daniels’ personal archives at the library. What standout pieces can people find in the collection?

I would encourage participants to really be open to all of it. Go with an open mind, an open heart.  Derek Mosley who is the archivist spearheading the papers and opening, and his team of volunteers, have worked tirelessly to make this happen. The Auburn Avenue Research Library is such an important space for black LGBTQ archives.  And I cannot talk about the papers and opening without thanking Rev. Duncan Teague. He has been so instrumental in all of this really.

What can we expect at the event?

In so many ways, I hope this event is not only about celebrating Tony as an incredible individual, but it also creates a space for community healing and restoration. My hope is that people will experience joy from the program. Anyone who attends will certainly learn quite a bit about Tony Daniels, his life and legacy, and his contributions to Atlanta’s black LGBTQ community and movement.  I’m very excited that Tony’s brother, Freddy, will be present to share stories about him.

This interview originally ran in Q magazine. Read the full issue below: