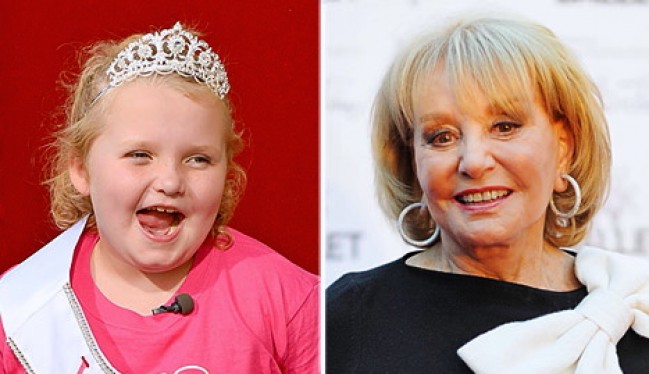 It’s easier than a hooker on Ponce to guess who’s on Barbara WaWa’s annual “Most Fascinating People” special. This year’s “Who You’re Most Sick Of” includes Uncle Poodle’s niece Alana Thompson.

Maybe the concept for the show was a good one when it started 20 years ago, but now the slow leak of who made Walters’ list of the year’s Most Overexposed People is almost as excruciating as the choices themselves once they’re revealed.

And perhaps Walters minions just run out of people who merit the recognition – the Dec. 12 special will also feature Secretary of State Hillary Clinton, Olympian Gaby Douglas, New Jersey Gov. Chris Christie – so they start adding to it to round out a Top 10. But they usually manage to get some gay in there. Adam Lambert made the list during some 2009 controversy about his AMA performance, for example.

Love it or hate it, ratings are the real reason Alana and mom June Shannon are finna get redneckognized in major network primetime. No fool, Walters knows—and clearly, so do ABC execs—what people will watch. Say it with us: cha-CHING!

While it’s beyond us why they haven’t renamed Walter’s predictable corral “Most Overexposed People of the Year,” it’s crystal clear that you’ll get one more shot of McIntyre, Ga., go-go juice and one more chance to hurl it up just in case you weren’t already completely sick of the Dew-swilling, Uncle Poodle-loving, Atlanta Pride antheming, gay Atlanta Halloween costume favorite little diva.

Along with are-they-or-aren’t-they boy band One Direction and soon-to-be Oscar host Seth McFarlane, Walters defends picking the Honey Boo Boo child by calling the TLC hit “a love story” between mother and daughter, according to Us Weekly.

The fart jokes and go-go juice Alana and her family enjoy so much belie serious, old-fashioned family values, Walters argues.

“Honey Boo Boo is not an obnoxious little girl. She’s sweet and loving with her mother and loving with her sisters [Jessica, Lauryn and Anna]. And now Anna has a new baby, and the baby has [three] thumbs — but so what? It’ll make you smile,” says the ABC standout.

That’s debatable, but she had to say something. Nevertheless, yes: Here comes Honey Boo Boo. Again.