“…The American Music Awards left many of [Lambert’s] fans, Christian conservative wing nuts and parents who’d let their young children stay up until nearly 11 p.m. on a school night in absolute OUTRAGE!” 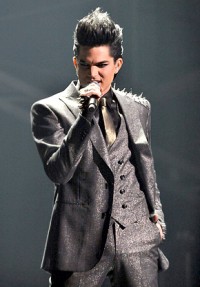 American Idol runner-up Adam Lambert was coy about his sexuality until after the competition ended, although there were photos floating around the internet of Lambert making out with a boyfriend and wearing enough make up to give any drag queen a run for her money. Everyone knew Lambert was gay (okay, maybe some tweens and 45 year old women with 14 cats didn’t catch on), and when he “officially” outed himself in the pages of Rolling Stone there was a collective “Duh.”

Lambert’s vocal acrobatics and glam rock persona made him the most exciting stage performer Idol had seen in its eight seasons. But he was also controlled by the producers and sang “safe” covers of classic and modern rock that appealed to all demographics and wouldn’t shock the 8 p.m. viewing audience.

So, Lambert’s performance on Sunday night’s American Music Awards left many of his fans, Christian conservative wing nuts and parents who’d let their young children stay up until nearly 11 p.m. on a school night in absolute OUTRAGE! He pranced around a stage that looked vaguely like Paula Abdul’s “Cold Hearted Snake” video, reigning in leashed dominatrix-clad dancers of both sexes, pushed a male dancer’s face into his crotch for a few pelvic thrusts, ran his hand between a female dancer’s legs and then kissed his androgynous male keyboard player.

When the AMAs aired later on the west coast the “offending content” had been edited out, but by then it was already on YouTube. Left out of the conversation was the song, “For Your Entertainment”. Frankly, it’s nothing special and Lambert’s voice seemed distracted by all the choreography. Electro-pop-dance tunes are a dime-a-dozen these days and artists on both sides of the Atlantic do it better than Lambert.

?While ABC was fielding 1,500 complaints, Good Morning America decided they couldn’t risk having a repeat performance by Lambert on it’s Wednesday morning live show, so they dumped him. Perennially last place The Early Show on CBS was more than happy to book Lambert, who turned in a performance so diametrically opposed to Sunday that the only word to use is sedate.

One has to wonder if Lambert’s record company and management team told him he’d better…ummm…straighten up or his career would be over before it began. ABC continues to cry mea culpa over Sunday because they claim Lambert added the homosexuality to his performance after rehearsals. Lambert himself said he was just “in the moment” and got carried away. However, he’s also accusing his critics of homophobia and double standard. ??

Lambert has been a big bag of contradictions the last couple of weeks. There was the very public dust up between him and OUT magazine, whose editor was so put off by Lambert that he wrote an “open letter” chastising the singer’s internalized homophobia. Lambert, who claims to be in control of his image, instructed his publicist to tell the interviewer he didn’t want to talk about politics, civil rights or the recent March on Washington. Lambert said he was a singer and entertainer, not an activist.

After the reaction to his AMA performance, Lambert is more than happy to discuss America’s ongoing bigotry. Lambert’s need to…errr…have it both ways aside, there is more than a strong whiff of homophobia and double standard. It reeks. ??

Let’s look at what else happened on the AMAs Sunday: Lady GaGa danced in a barely-there bodysuit and set her piano on fire; Eminem sang about raping women, Janet “Wardrobe Malfunction” Jackson grabbed a male dancer’s crotch; Jennifer Lopez was crawling – when she wasn’t falling – all over her buff male dancers in a boxing ring; and Shakira had enough coochie-cutter-wearing rump-shakers that they spilled out into the aisles of the Nokia Theater. Not a word of criticism. Zero.

It’s all about Lambert for daring to be gay. Of course, the AMA stuff is tame compared to what has been aired on TV in the past. Madonna has been giving shock performances since before Lambert was born, starting with rolling around on stage singing “Like A Virgin” with a wedding gown thrown over her head on MTV.

There have been countless music and award shows – both on cable and in primetime – where women have gyrated in scant clothing or a rapper has bragged about fucking his bitch, while slapping a lady dancer’s ass. It never raises an eyebrow. That’s where the homophobic double standard comes in. It’s perfectly fine for a perceived “straight” performer to be sexually provocative in dress and action, but the first time an out, gay man does the same, it’s “inappropriate.” ??

I was put off a bit during Lambert’s run on Idol that he never acknowledged his sexuality – not even mentioning his then-partner who was in the front row every week – but I knew that as soon as the show was over, he’d pop up on a magazine to state the obvious. Lambert has every right to avoid political issues. He doesn’t want his sexuality, which is only one part of his identity, to overshadow his art.

As a gay man, I totally understand that. But I also understand that America is at a pivotal moment in history, when every LGBT person needs to speak out for his or her rights. With such a high-profile, Lambert has the potential to be a guiding light to young gay people who are still in the closet or suppressed by their family or religion. ??

I wonder if Lambert knew on Sunday night while he was shoving his tongue down his keyboardist’s throat on national television that he was making a political statement? Maybe it didn’t dawn on him until he looked at his Twitter account later and saw words like “faggot”, “pervert”, “sick”, “disgusting”.

Whether Lambert wants to be part of the political landscape, he’s put himself squarely in the middle of it now and there’s no going back. I hope he will rise to the occasion and find a way to comfortably mix his music with advocacy. Who would have guessed that once-closeted Elton John and material girl Madonna would become such important voices in AIDS awareness and for human rights. They found a way to mix their art and politics while keeping their audience.

As Madge once said: music makes the people come together. It’s time for a new, young voice to take up the cause, and Lambert is ideally suited.

Earlier this year, Beyonce was bumping and grinding all over TV and the Internet for her hit “Single Ladies (Put a Ring On It).” It became such a phenomenon, that four and five year olds were seen re-creating these sexually suggestive moves – and mouthing the even more risqué lyrics – in YouTube clips filmed by their laughing, delighted parents.

On the recent Nickelodeon Kid’s Choice Awards, 16-year-old Miley Cyrus showed off her skills with a stripper pole on top of an ice cream cart, not to mention the skeezy photos with her daddy and suggestive photos she texted to her boyfriend (and don’t even get me started on those puritanical Jonas Brothers who wear pants tight enough you can see their religion). Her concerts continue to sell out and her records sell millions, while parents defend Miley as a wholesome teenager being crucified by the media. Soulja Boy had a hit song about masturbating on his girlfriend (what did you think “Crank That” was about?) and it became a staple at high school pep rallies.

All these artists are straight, so it’s fine. This is the double standard that Adam Lambert is talking about. He’s absolutely right.??

As a P.S. to my essay: I just saw the CBS Early Show clip package before the Adam Lambert interview. They blurred out Adam’s kiss with the keyboardist, but then showed Madonna kissing Britney without the blur. The double standard continues.

This column comes courtesy the author and its original source, soldoutmusic.com. Collin Kelley is an Atlanta-based journalist, acclaimed poet and novelist, as well as a gay literary advocate. His latest book is “Conquering Venus.” Find it and much more on his blog, Modern Confessional.