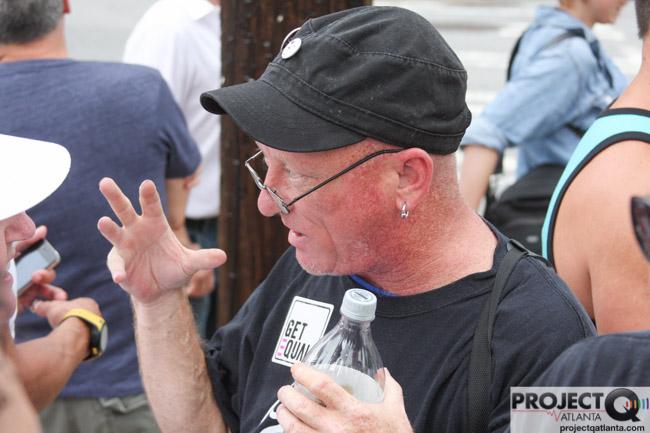 The body of a young gay homeless man was found in a Midtown hotel on Saturday, just days after he was turned away by an LGBT homeless shelter over his drug use.

Matthew Ralston's decomposing body was discovered in a room inside the Residence Inn on Peachtree Street about 3:30 p.m. Saturday. The 20-year-old man from Prattville, Ala., recently relocated to Atlanta and spent the last few weeks couch surfing among friends.

There were no signs of foul play and he was found alone, according to the Fulton County Medical Examiner's office. But the exact cause of Ralston's death won't be determined until they receive the results of toxicology tests, which could take weeks, says Mark Guilbeau, a senior investigator for the medical examiner.

Atlanta police say two hotel employees were checking on Ralston, who was scheduled to check out on Aug. 16. When they opened the door, they found Ralston's nude body lying on his bed face down, according to a police incident report.

“I went inside the hotel room and saw drug paraphernalia in [Ralston's] bag and lighters on the couch,” Officer K. Powell wrote. “There was also a tea bag wrapper blocking the peep hole. I called Medical Examiner Laura Salm who came on scene and believes that the cause of death is due to drug overdose but the exact cause is pending.”

Ralston's body was found just hours before a 42-year-old gay man was discovered dead in a Cheshire Bridge Road motel on Sunday.

Lost N Found Youth, a non-profit that shelters homeless gay teens, says Ralston used drugs and that's why they turned him away just days before his death.

Morinng comes and Matthew awakes and we start the interview, right after the drug test.Matthew brings the sample and before it could even be turned over to process, he states – I’m going to fail that test. He explains that he had been using. It is explained that we could work with him if he was ready to stop but drugs are not allowed in the program. Matthew said that he understood but was not ready to stop. At his request, we took him back to midtown and drop him off.

Parents speak out about son

UPDATE | On Friday Ralston's parents, John and Melissa, spoke to Project Q to discuss their son and to clarify that they were unaware he was homeless and abusing drugs. Ralston's sister, who traveled to Atlanta earlier this week to collect his belongings, did not learn of the apparent drug use until after his death, John Ralston says.

She learned of his being homeless after talking with Lost N Found officials on Monday in an effort to learn more about what happened to Matthew Ralston before his death, he adds.

Melissa Ralston says her son hoped to be self-reliant and didn't share his struggles with the family.

“It is important that people know that we didn't abandon our son,” she says. “No one knew what he was going through or that he was homeless. We would have done anything we could. I want people to know that Matthew had a very loving and caring family.”

She says that her son wanted to find a place for he and his pet cat.

“The reason why he wasn't coming back here was to rely on himself. He wanted to learn a way to provide for himself. His dream was to have his own house to take care of himself and his cat,” she says.

The family says they hope to create a foundation called Matthew's House to provide a safe space for people in a position similar to their son's.

“We want to take other people's pain away and Matthew knew that,” Melissa Ralston says.

'Matthew’s story has to be told'

The group's executive director, Rick Westbrook (photo), provided the sad tick tock of how Ralston's interaction with Lost N Found unfolded. Spoiler: It yanks at your heartstrings. (UPDATE | The group removed the post on Friday.)

This is a post that shares both Good and Bad news…

Lets get the BAD out of the way and end with a positive note.

Allow me to tell you the story of Matthew.

Matthew called the LNF hotline last week at around 4PM. He had been encouraged to do so by some friends. He came from Alabama to Atlanta about a month ago. He has been couchsurfing for the last month with friends he meets. But – as always, that is shortly coming to an end and he needs to find a place to stay. We at LNF explain that we would have a space coming available and that we need more info, Matthew does not respond. This is not unusual as a youth on the street as phone run out of battery and need to recharge.

At 11:30 Mathew texts the hotline again and says that the place he had lined up for the nite had fallen through. This was one of the nites last week that was cold and rainy. I texted back and said that we would couchsurf him until we had a spot or could find a location for him and that I was on my way to pick him. He is very excited.

At 11:40 I pull into the local coffehouse where alot of our youth congregate. I meet Matthew. He is 20 years old, longer blond hair, blue eyes, tats, piercings, and maybe 120#s soaking wet.

He puts his stuff in the car and we head to LNF house. He is very easy to talk to and seems intelligent. He asks if I had any food, so I stop and get him so fast food. We get to LNF and start filling out paperwork as he eats. I know he is exhausted, so I give him a quick tour and tell him to go to bed. I explain that we would finish the process in the morning.

Morinng comes and Matthew awakes and we start the interview, right after the drug test.
Matthew brings the sample and before it could even be turned over to process, he states – I’m going to fail that test. He explains that he had been using. It is explained that we could work with him if he was ready to stop but drugs are not allowed in the program. Matthew said that he understood but was not ready to stop. At his request, we took him back to midtown and drop him off.

We explain that we are available for him if he needs us to just call for food, clothes, or to talk – that he needed to understand that he had value in the world and that there are people would care about him. He promised to call if needed.

We got THE CALL today. It is words you never want to hear about anyone.

Matthew had accidentially Overdosed in a hotel room over the weekend. This was verified thru APD

We called the number we had listed for him and his sister picked up. She was very kind and said that Matthew had mentioned LNF and hoped he could kick the habit and go into our program. She thanked us for trying to help and said our card was still in his wallet.

Needless to say this has not been a banner day for me. As Executive Director, my head tells me that he had done all that we could do for him and I know that.

My activist heart is a mess, it me wants to scream, ache, cry uncontrollably and I HAVE.

The combination of head and heart tells me that Matthew’s story has to be told to every Gay, Lesbian, Bi, Tran, Queer Friendly or Straight person that will listen. SO I AM!

Why? Because this as well as all the other stories we tell should never happen BUT they do.

The needless death of this young man has enraged and fuled the fires that burn within me to tell these stories and get in front of people that need to know, that need to help.
In hopes that it starts a conversation between familes, friends, partners, everyone – that this does not need to happen.

We are doing great things at LNF, but we can and WILL do more. Our communtity was always stepped up and made LNF what it is today.

-We are expanding our capacity three fold for our current propgram in the next year.
This will give us emergency capacity and a drop in center.
Location and announcements on this coming soon.

-The BIG annoucement today was to be GOOD News.
We actually have signed a lease on a space that will allow us to open the Thift Shop,
the space is so HUGE that we will also open a DROP IN center that OUR KIDS need so despritly need.

So ATLANTA – we are ahead of schedule for what we promised, just not ahead enough for Matthew.

Please discuss with the people in your world. Donate to LNF and help us help more of our youth.