HIV tests up, but Georgia still leader in AIDS 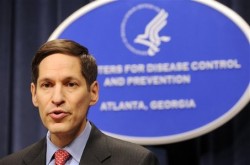 The next time you’re attending a gay event, look at the guy to your left, then at the guy on your right. One of them hasn’t been tested for HIV. Check out a group of five HIV-positive people and it’s likely that one of them has no idea of their status. Those are among the sobering factoids released Tuesday by the Atlanta-based Center for Disease Control & Prevention ahead of World AIDS Day on Wednesday. Though the number of adults tested for HIV reached a record high in 2009, it’s not enough, federal health officials say. "Today's news shows that we have had progress increasing testing, and that more progress is both necessary and possible," CDC director Thomas Frieden (photo) says in a prepared statement. "With most adults and with nearly a third of high-risk people having never been tested for HIV, we need to do more to ensure that all Americans have access to voluntary, routine and early HIV testing in order to save lives and reduce the spread of this terrible disease." In 2009, nearly 83 million adults between the ages of 18 and 64 reported having been tested for HIV, an increase of more than 11 million people in three years, according to the CDC. Yet 55 percent of adults – and 28 percent of adults with a risk factor for HIV – have gone untested, which feeds additional infections, the agency says. People who are diagnosed earlier have longer life expectancies thanks to improved HIV care and treatment, the CDC says. The report released Tuesday also reinforces that Georgia is a leader in the U.S. in HIV and AIDS cases: • The South and Georgia are among the areas with higher rates of AIDs than other parts of the country. In Georgia, some 28 to 41 people per 100,000 have AIDS, a rate among the highest in the region. • Georgia ranked fourth among states for the highest estimated number of HIV diagnoses in a 12-month period. The state recorded 3,067 cases of HIV, behind only Florida (7,670), New York (6,129) and Texas (4,487). • 1.1 million adults are living with HIV and as many as one in five of these people are unaware they are infected. • At least 1 in 3 people who test positive for HIV is tested too late to get the full advantage of treatment.