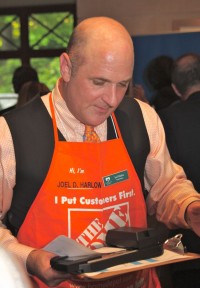 OK, clicktivists. Here’s your chance to really make a difference for Jerusalem House, a non-profit that provides housing for people with HIV and throws some big gay parties to raise cash.

The group is one of four finalists in June for the Home Depot Foundation’s Apron in Action program. That means they could receive a $25,000 gift card from the Atlanta-based home fix-it giant that Jerusalem House says will help fund safety measures at their housing units.

Here’s how you can help: Vote. It’s easy – just go to the Facebook page for the Home Depot Foundation and vote for Jerusalem House. You can vote once per day throughout June. The non-profit that collects the most wins the gift card. As a finalist, each of the four groups receives $5,000 each in gift cards.

“Being selected as a finalist for the Aprons in Action program is an honor, and we are so thankful for the recognition,” Charlie Frew (bottom photo), executive director for Jerusalem House, says in a prepared statement. “If we actually win the $25,000 Home Depot gift card, we’ll be able to finally build permanent steps at our Family Program and provide a safe pathway for our child residents to catch their buses for school, and for our mothers to access public transportation for work and medical treatment.”

The non-profit is the largest provider in Atlanta of permanent housing for homeless and low-income people and families affected by HIV and AIDS. If you don’t know the group, you probably are familiar with its signature fundraising event – Carnevale held each October (view photos). The costume party with flair is a hit among the gays and provides a big boost to Jerusalem House’s bottom line.

The group also hosts the Stars Party & Silent Auction each spring (view photos). That’s where volunteers parade around in the iconic Home Depot aprons to facilitate your silent auction purchases (top photo). There was also that hunky birthday bash, too (view photos).

Earlier this year, Jerusalem House received $188,376 in grants from the Community Foundation for Greater Atlanta.