A shortage in the number of doctors, nurses and other medical professionals who fight HIV in Atlanta will be exacerbated by a federal plan to end the epidemic, according to several local HIV experts.

“If you ask any director of a local HIV clinic, they will likely tell you that they have a hard time recruiting and maintaining clinicians to take care of their patients,” Melanie Thompson (top photo), principal investigator for the AIDS Research Consortium of Atlanta, told Project Q Atlanta.

A federal plan to end the epidemic by 2030 focuses heavily on increased HIV testing and getting those who test positive into care. Four metro Atlanta counties – Cobb, DeKalb, Fulton and Gwinnett – are targeted as part of the plan.

Getting those patients into care will require a “substantial increase” in the HIV workforce in Atlanta, according to Wendy Armstrong, medical director for the Infectious Disease Program at Grady’s Ponce de Leon Center.

“It’s become an even hotter button issue as we think, well gosh, what do I do if the roughly 6,000 patients living with HIV in Fulton County that aren’t in care actually get into care?” she said. “That would double the size of our clinic, and that isn’t possible with the available staff.”

The Ponce de Leon Center serves approximately 6,200 people in metro Atlanta living with HIV, which is a 33 percent increase in the past decade, according to Armstrong. Grady is planning a $38 million renovation of the facility to serve more people living with HIV. 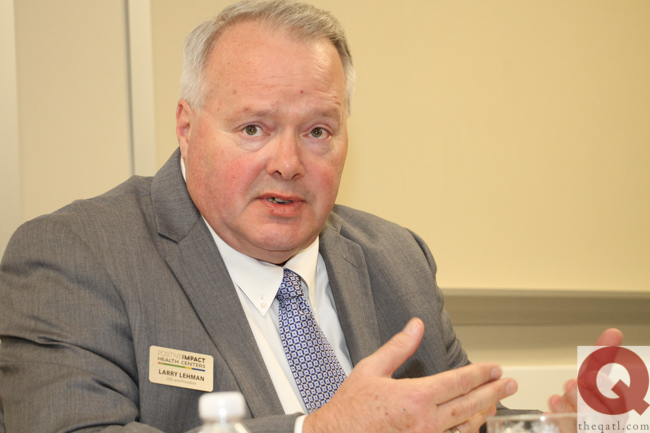 A shortage in HIV medical professionals has been going on across the U.S. for nearly a decade, according to Thompson and Armstrong. One of the main reasons is compensation.

“We know that for a long time, salaries haven’t been as high in some of our clinical areas as they have been in other more lucrative areas,” Thompson said.

The issue has affected Positive Impact Health Centers, according to Larry Lehman (second photo), the organization’s president and CEO. Positive Impact has clinics in Cobb, DeKalb and Gwinnett counties.

“Over the past couple years, it has been harder to find folks,” he said. “We keep trying to be more competitive with salaries and benefits to attract top talent, which is critical in the work that we do.”

U.S. Rep. John Lewis proposed one remedy to the problem earlier this month. The longtime Atlanta Democrat introduced the HIV Epidemic Loan-Repayment Program Act, which would provide up to $250,000 in student loan forgiveness for doctors, nurse practitioners, physician assistants and dentists who provide HIV treatment.

The bill would be “an enormous help” in fighting the HIV workforce shortage, according to Lehman.

Thompson worked on the bill with the HIV Medicine Association, which she is past chair of.

“While we’d like to see higher compensation, one thing we can do until that happens is to try to decrease the debt,” she said. “That’s something that I think is really going to be critical.”

Another reason for the shortage is the growing number of HIV medical professionals who are retiring.

“The supply of HIV clinicians and clinics is going in the other direction,” Thompson said. “HIV clinicians, just like the patients, are getting older and some are beginning to retire from the workforce and not enough are coming in.”

There’s also a false sense that the HIV epidemic is over, according to Armstrong.

“The rhetoric that’s out there is that it’s not a problem anymore, and that’s not true, especially for us in the South,” she said.

The strain on current HIV medical professionals will only get worse as the federal plan ramps up, according to Thompson.

“If we’re going to use [the plan] to bring thousands of people into care, we need more funding and a qualified workforce,” she said.