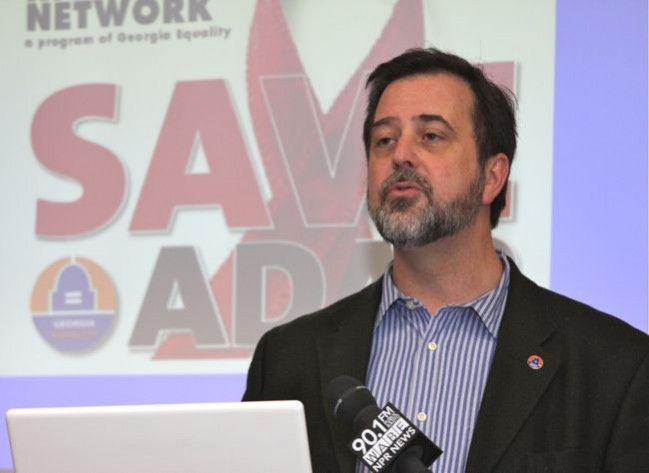 HIV activists in Atlanta on Tuesday decried a growing waiting list for a program that supplies AIDS medication to low-income people and asked a cash-strapped state legislature for an additional $5 million in funds.

The calls, which come as lawmakers under the Gold Dome reached the midpoint of the legislative session, repeated an urgent message these same HIV activists and caregivers delivered on World AIDS Day last December: Provide additional funds for the state’s AIDS Drug Assistance Program or face the consequences of a waiting list that continues to balloon and is now the second-largest in the U.S.

“Without additional funds immediately, the waiting list will continue to grow and will reach over 1,300 people by June,” said Jeff Graham (photo), executive director of Georgia Equality, the statewide gay rights lobby that organizes the Georgia HIV Advocacy Network.

“That’s 1,300 people, men and women, living with HIV from throughout the state of Georgia that will not know if and when they will be able to get the medications that very well could save their lives,” Graham added. 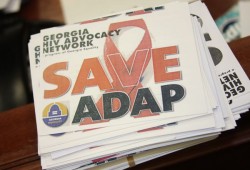 Graham and the other HIV activists asked for the additional funding during a press conference Tuesday at the Grady Infectious Disease Program, the Ponce de Leon Avenue center that serves many people in the ADAP program.

Some 4,300 people are enrolled in Georgia’s ADAP program, which provides access to more than 60 medications used to treat HIV and AIDS-related complications for people with low and moderate incomes. Some 1,009 people are on the ADAP waiting list, a number that has increased nearly 300 people since early December.

“Regardless of the given economy, access to quality and consistent healthcare and healthcare coverage is a human right,” said Dazon Dixon Diallo, executive director of SisterLove and chair of the Metropolitan Atlanta HIV Health Services Planning Council. “This is a serious situation in which people who do not have means continue from day one to need help.”

Graham also pointed to the results of a recent poll of registered voters in the state that showed support for increased ADAP funding. The poll from lesbian-owned Schapiro Group showed that 54 percent favored more resources for ADAP, while 11 percent advocated for less funds. Some 29 percent said the funding should remain about the same. Metro Atlanta residents favored additional funding in numbers greater than voters in other areas of the state.

Larry Lehman, executive director of AID Gwinnett, said his organization serves about 700 people and 10 percent of those have been placed on the ADAP waiting list.

“The list continues to grow and grow every day,” Lehman said. “It is a cost savings program. It does reduce infection rates in the community. It is absolutely a no brainer what we need to do here.”