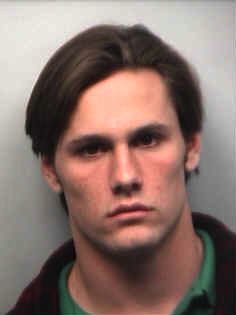 What’s a 17-year-old jock at a prestigious private Atlanta high school to do when he's feeling horny, all-powerful and forceful? Hit the showers and sexually assault a teammate. Then go to jail. William Jackson Houk (photo) surrendered to Atlanta police on Sunday and remains jailed without bond in the Fulton County Jail. He’s charged with aggravated sexual battery, a crime that brings a sentence of 25 years to life in prison, for allegedly assaulting a classmate in the gym shower. Houk, 17, plays on the varsity football team for Westminster Schools, a 60-year-old private school in northwest Atlanta. The school alerted parents and staff about the Oct. 22 incident in an email on Monday, according to the Atlanta Journal-Constitution.

“I write to you in order to express deep concern regarding an incident that took place last week involving a few students on the varsity football team,” school president William Clarkson wrote. “I can assure you that we have taken all steps within the school’s strict guidelines and protocols regarding such matters, including the fulfillment of our responsibility to report this particular incident to the Atlanta police. They are now in charge of the investigation, and we are cooperating fully with them.” Clarkson said in an interview that the school learned of the incident when some coaches overheard players talking about it at a practice and questioned the alleged victim.

The school says details of the incident remain “fuzzy,” though the AJC points out that aggravated sexual battery occurs when a “foreign object” is inserted into the body of the victim. The crime is one of the state’s “seven deadly sins” that allow parole only after first serving 30 years of a life sentence. What could the "foreign object" be? Toothbrushes seem to be popular assault items for high school wrestlers in Georgia. UPDATE: An earlier version of this post said that Houk's parents were on an overseas trip at the time of the alleged attack. A report from Atlanta police indicates that the victim's parents were out of town and that he was being assisted by a relative while they were gone.