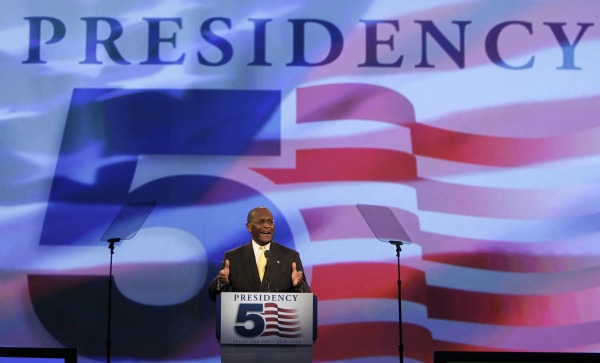 Score one for the pizza magnet! Just a few weeks after hitching his presidential ride back to the anti-gay express, Atlanta’s own Herman Cain won something. Now he’s trying to add a few minutes to his 15 minutes of anti-gay fame. Republicans in Florida like their gay sex on the down low – Mark Foley, anyone? – so Cain’s recent gay purge of his campaign played well with GOP voters during a poll on Saturday. Cain, who hasn’t even been mentioned in the same breath as the race’s second-tier candidates in recent weeks, trounced Rick Perry, Mitt Romney and the entire field with his 37 percent in a straw poll on Saturday. It had nothing at all to do with Romney and that hateful bitch skipping the contest. Nope, it was the gay thing. You know the one – forcing out campaign operative Scott Toomey and his gay shenanigans when the God-fearing folks of Iowa started complaining. Cain spent his Monday basking in a (non-gay) orgy of media attention about the Florida win. Bet he won’t mention his desire to not only beat Obama next year but impeach him, too, over gay marriage. That would just remind voters now giving him a second look that he's a little too cray cray for most. Georgia’s other favorite son in the race, Newt Gingrich, scored 8 percent in the straw poll. He needs a good gay purge to surge in the next one. Photo courtesy John Raoux, Associated Press