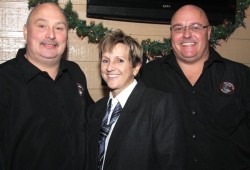 The Heretic marked its 19th anniversary on Monday with a holiday-themed celebration that included cocktails, hors d’oeuvres and even Santa.

Friends and supporters of the gay nightlife mainstay enjoyed the invitation-only event as they mixed and reminisced with the bar’s trio of owners– Ray Collins, Bev Cook and Alan Collins (top photo). A handful of the Armorettes — dressed conspicuously in their non-drag street clothes — were on hand, no doubt celebrating their August move to the bar for a monthly burlesque show.

The dance floor was converted into the social center with appetizers and a chocolate fountain stocked with marsh mellows and strawberries. Santa set up shop in a back corner of the bar, filling a spot that’s seen it’s share of late-night, ahem, fun.

It was just a few weeks ago that the dance floor was thumping thanks to the work of Sin Morera, who spent his Thanksgiving Eve inside the DJ booth. The bar’s also played host to a resurgent Business Owners Atlanta, the recalibrated Bar Owners Association that had been dormant until September.

The Heretic will again be packed on Saturday for a double-dose of fun. It’s the Armorettes Trailer Park Christmas Carol followed by DJ Lydia Prim’s Birthday Bash with guest DJ Jeffrey Jacobs. For New Year’s Eve, the bar will crank it up for a Joining Hearts benefit.

The Cheshire Bridge Road bar is one of handful of LGBT businesses to recently celebrate an anniversary: Brushstrokes turned 21 on Dec. 1 and Woofs marked its 8th anniversary in November.