Here’s why your gay penis doesn’t measure up

"How many inches make me a man?" With that question, a workshop about dick size gets started. Talking about penis in a roomful of mostly gay men sounds like fun. The reality is that it's uncomfortable. Especially early on a Sunday morning. But there I sat in a small, second-floor conference room inside the Hilton Atlanta, ready to see how this workshop unfolded. Buried in the 145-page program for the Creating Change conference in Atlanta last weekend, "Hung?" caught my eye. Of course it did. Not just for the punchline. Or that some cute young progressive gays might be seated next to me. But there was some educational purpose to this 90-minute session. Really.

No matter how flirtatious the first text, what he really wants to know is “how hung?” Explore and deconstruct the images and perceptions that play a part in our collective thoughts on penis size and its impact in the gay male community. From sexual positions, to STD transmission, and self image, we will explore why we measure the quality of the person in inches.

Our guide for this exploration -- Matthew LeBlanc (top photo), who works with LGBT students in higher education, offered a warning as he opened his slide show: "This is the last time you will see a banana in a slide." He was right. The unvarnished conversation was peppered with slides of partially clothed dudes, naked dudes, dudes with cocks and hung Olympic dudes. You know, in a research sort of way and not a porn sort of way. Mostly. LeBlanc weaved the images into his talk as easily as he did feedback from the not-so-shy audience, which was a collection of mostly white, mostly young gay men. Some with better hair than even a gay man should have at 9:30 a.m. There were a handful of black guys, too, along with a trans woman and two other females. But it was a pretty homogenous group for such a diverse conference. That was surprising. Their frankness wasn't. "I haven't been very sexually active before and I am just starting to bring myself into that realm," one of the participants says in response to LeBlanc surveying the room on why people came to his workshop. After all, they could be sitting through "I'm Online: LGBT Identity Development in a Social Context," "69 Ways to Use Saran Wrap: Queering your Campus' Safer Sex Education" or "The Perfect Storm: Rural Organizations Empowering Youth with National Frame." Yeah, I'd settle on dicks, too. Other people in the room admit they are here about small dicks -- the small dicks of their partners, of course -- or for boyfriends who are size queens. So let's get cruising! 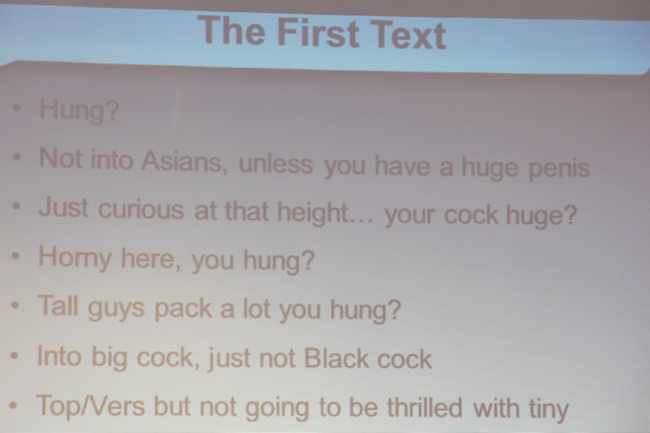 LeBlanc digs in by popping up a slide of those popular, to the point and often offensive questions that gay boys get when they cruise with Grindr, Manhunt, Jack'd and more (second photo). "Hung?" "Tall guys pack a lot you hung?" "Into big cock, just not Black cock." They might get you laid, but there's a cost, he says. "There are very specific actions and ways people approach individuals, whether it be race or height," LeBlanc explains as he cites the example of watching how black guys get hit on in gay bars. "The way it comes up a lot in person, in the bars black guys will be approached. 'You are black, you must be huge. I am a bottom so let's make this happen.'" As a tall white guy with a black partner, I say preach, mister, preach! Things come to a screeching halt when an older gay man -- a technophobe with no TV, smartphone or computer and a long history of telethon phone sex -- interjects again, this time to talk about vaginas and offer a long testimony about all the cocks he's experienced, from the micro ones to the really, really big ones, and even more about vaginas. Fungible ones. LeBlanc, well practiced at keeping things moving thanks to years of working with easily-distracted college students, offers the perfect retort: "While that's true, we're not really dealing with vaginas." Boom. Moving on to crotch watch, LeBlanc opens up about what we know to be true: Gay men notice dudes in shorts, sweatpants, jeans and athletic gear and measure their junk based on the bulge and the flop, not reality. "I have friends who call it Crotch Watch. Did you see what was on CW at 1 p.m.," someone in the crowd offers. LeBlanc says he plays on a gay kickball team with guys who will call a timeout if a hot dude is passing by so they can check out his package. Ah, Piedmont Park in the summer. "Is that the only thing that matters," LeBlanc asks in a boner kill sort of way. "We just make this narrative up ourselves. We just took away that person's dignity in one fell swoop." And that's the point: In a 9-inch sort of world, the 5.9-inch size of an average dick will disappoint its owner and anyone wanting to choke and sit on it like the hotties they see in man-on-man porn. "It seems like nine is the magic number somewhere out there on Tumblr. If we're setting the bar at nine and the median average is about 5.9," LeBlanc says before being interrupted by a black guy in the crowd who confirms the judgments we're not supposed to be making. "The median is different for different people on multiple genetic levels." Wait, did he just say black guys have bigger dicks than everyone else? That's how I heard it, anyway. Then the older gay pipes in. Again. "Depending on the angle of viewing, cocks are bigger to the eye than they are to the hand or the butt," he says. LeBlanc, never missing a beat, offers this quip: "And I think that's the goal of most people to get as close as possible." 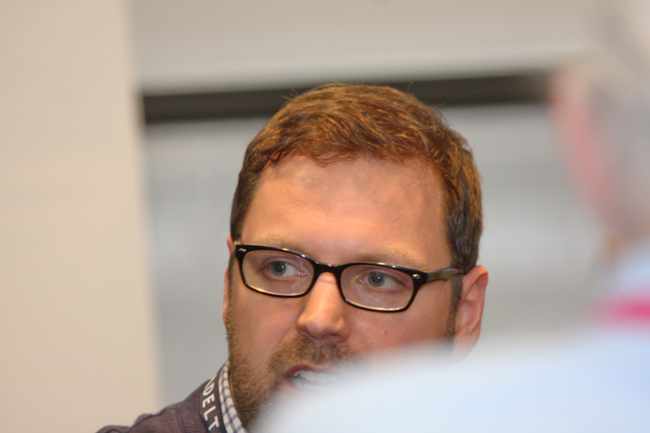 Is 9 inches the norm?

So, back to the academic side of this workshop. If the perception is that big dicks are wonderful, that 9 inches is the norm (thanks, gay porn), and you measure up with the disappointing average of a notch under 6, that can cause problems up in your big head, down in your little monster and for sex partners looking to match their porn perceptions with your reality. Stigma, shame and gay life satisfaction are impacted. "The only rule is that everybody wants more, everybody wants more. Is that the number that makes it good -- eight or nine?" LeBlanc says. And then someone in the crowd, clearly with a small dick, pipes up. "Just because you have a 747 doesn't mean you know how to land it." Uh-huh. But this pursuit of penis size impacts even our well-hung gays because, LeBlanc says in pointing to a National Institutes of Health study, penis size equals satisfaction. The 2010 study of 1,065 gay men in New York City shows that fewer gay men admitted being smaller than average than straight guys and more boasted that they were above average than hetero bros. Of course they lied. But that's the point. What happens? According to the study, a small-dicked gay guy is likely to feel that he needs to bottom, with average-sized guys saying they are versatile and big-dicked fellas going for top. "This is why it's important to recognize that not everyone is running around with eight or nine inches. The way we act around this is really affecting people. It changes the way you live your life in this gay world," LeBlanc says. It even prompts some people to try penis-lengthening surgery to add a half-inch to their flaccid length. A slide from that surgery is something you never want to see, especially on a Sunday morning. Trust me. But men try it to relieve the pressure and stress of not measuring up to gay standards. So love your penis, LeBlanc stresses. Whatever its size. And gay boys should love it back. Whatever its size. The chase of the big bulge, that effort to match in reality what you see in porn, takes its toll. "We are assholes. A lot of this we are perpetrating on ourselves. The more we go around instigating this mentality within the community, it really is devaluing people at a huge level across the board. We are cutting ourselves off at the knees. We're not embracing the uniqueness of the community, who we are," LeBlanc says as the workshop comes to a close. Besides, he adds, big dicks bring their own issues. "There is a size at which pleasure occurs and then we get to a size where the pleasure stops and we get to an ordeal." Love your penis. Even the small ones.