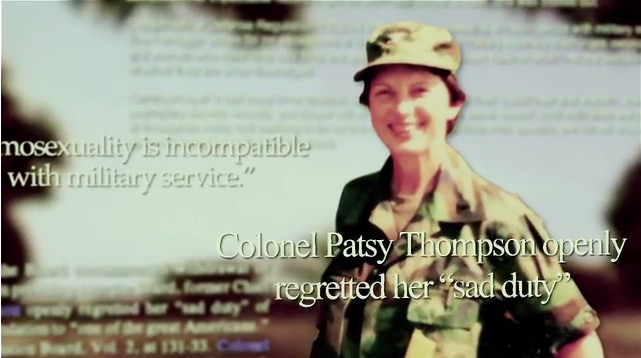 Col. Grethe Cammermeyer’s dismissal from the National Guard for being a lesbian is one of the most infamous injustices of the “Don’t Ask, Don’t Tell” era. So why does she call the closeted gay officer who oversaw it a hero?

The story that answers that question is the next mission of gay Atlanta filmmaker Cindy Abel. She’s taken to Kickstarter for donations to help tell it in “Surviving the Silence: Love & Impossible Choices” (trailer above). The film unveils the complicated closet and inner turmoil of Col. Patsy Thompson, the lesbian who presided over the board that dismissed Cammermeyer in 1992. Thompson’s sexual orientation was not public until a few months ago.

“After talking with Col. Cammermeyer, I realized how courageous Col. Thompson has been,” Abel says in a prepared statement. “Back then, by doing all she could to get the best possible outcome from a horrible situation, and now, by telling her story and risking being called a coward by those who don’t grasp the importance of what she did.”

Cammermeyer was the highest-ranking officer to be dismissed for being gay. The case inspired her autobiographical book “Serving in Silence” and the movie of the same name starring Glenn Close as Cammermeyer. That’s where Abel got the name for “Surviving the Silence,” the as-yet-untold story of Thompson and her wife of 30 years, Barbara Brass. Interviews with the couple as well as Cammermeyer are part of the film.

“Pat faced an impossible choice,” Cammermeyer says in an excerpt provided by Abel. “She could have come out and then there would have been two of us dismissed without recourse, or she could fulfill her duty in a way that allowed me the best possible defense. By presiding over the board, Pat had a profound impact on my ability to get into federal court and make my reinstatement possible. And in doing so, she played an important role in enabling us to move forward to finally get the repeal of ‘Don't Ask, Don't Tell.’”

And the love story of Thompson and Brass also exposes the silent suffering of gay military spouses under the anti-gay “DADT” policy, Abel adds.

“The stories of some armed services members being discharged before and during ‘DADT’ have come to light, but their partners, for the most part, have remained rather invisible,” the filmmaker says. “Surviving the Silence not only documents history in a very human way, it shows the agony and courage of fulfilling one's duty and the triumph of love over the obstacles the government Pat was serving had put in their way.”

The Kickstarter campaign seeks $10,000 to go toward research and more footage in phase one of a three-part production process. Abel, who brings her experience creating the gay political documentary “Breaking Through,” expects to spend more than $250,000 in pre- and post-production as well as publicity and fees on “Surviving the Silence.”

Visit the “Surviving The Silence: Love and Impossible Choices” website, and donate to the project on the movie’s Kickstarter page.