Help! Older man isn’t my daddy and shouldn’t treat me as his sub 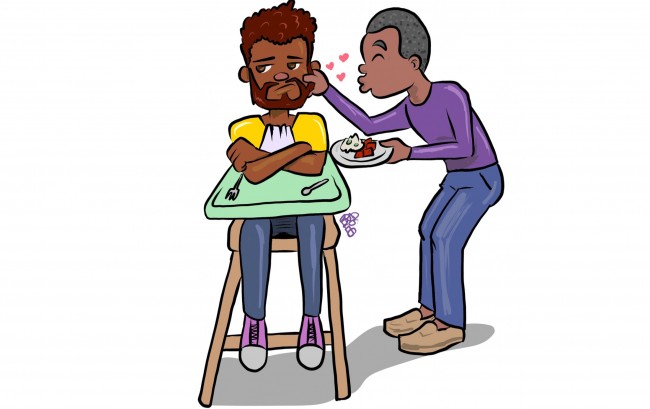 If your older boyfriend wants to make you his prince and you’re not the one, or a so-called ‘friend’ chokes on his own HIV stigma, it’s time to reach out for help in this week’s Q Advice.

I’m dating a guy 22 years older than me. I am gainfully employed and independent, but he insists on paying for every meal and movie. At first, I thought he was being unnecessarily generous, but when I insisted on picking up a check, he all but patted me on the head and called me princess.

What he actually said was, “I get offended when you insist. Use your money to buy yourself things you want. I got this.” He might as well have stuffed a C-note in my crotch and told me to go buy myself something pretty.

I think he sees me as a subservient wife or mistress. Like this is 1952 and we’re playing house. Well, I am not the one. I do like the guy, but this has got to stop.

At any age, background, experience and plain old psychological issues can make it hard to let go of tired gender roles. And society is no help. Dating and mating rituals developed over centuries are trouble enough for straight people, much less two men trying to relate.

Try paying in advance. Buy movie tickets online and meet him at the door with his admission in hand. Pay the tab while he’s in the restroom and tell him it was your turn.

If that doesn’t work or you feel it’s too sensitive a subject, just communicate. Bring it up, not in the moment, but in a neutral setting with no pressure. Exchange ideas, and see if you can work it out.

Finally, consider if you are subconsciously attracted to – and attracting – men who want to take care of you. There’s nothing wrong with that, as long as you know it’s happening and don’t let it override your own responsibilities and self worth.

A friend of mine was recently diagnosed with HIV, and I couldn’t be angrier. I haven’t spoken to him since he told me, and I’m considering just letting the friendship die on the vine.

I mean, it’s a terrible tragedy and all, but it’s not like he didn’t know how to prevent it. Don’t I deserve friends who are smarter than that?

True friends love each other unconditionally, and they stick around, not bolt in tough times.

I assume you’re scared and not a jerk, and that’s understandable. Your buddy is going to be OK once he gets a handle on his situation, so the only “terrible tragedy” to worry about is leaving him stranded.

Whether you approve or not, there are reasons guys might stray from safer sex. Condoms can be cumbersome and distinctly not sexy. The heat of the moment, safe-sex fatigue or recreational substances might also influence decision-making. Maybe your friend is even depressed or feeling too unworthy to bother with safe sex.

You’re right about one thing, though: You should be angry. At HIV, not at your friend.