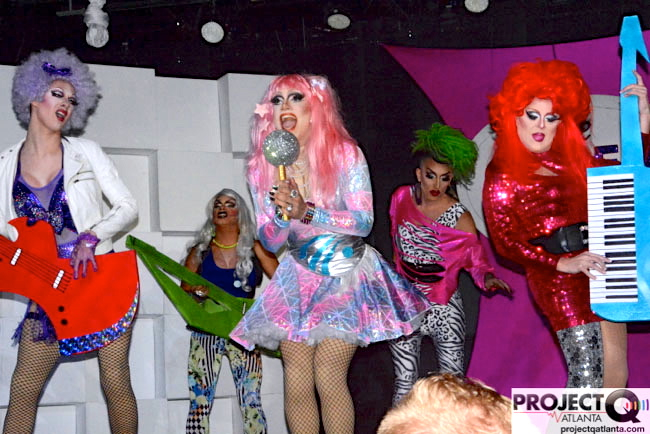 Everything that makes the Other Show special is every reason that fans of the drag cabaret at Jungle will want to support their next adventure: Fine Art. Unusual? Yes, but we’d expect nothing less than singular and unique.

Combining forces with two of gay Atlanta’s hottest photographic artists, the quirky-cool queens (photo) are taking their magic off the stage and into a whole new dimension. Just as emphatically as we are among the rabid Other Show fans, we love us some “Legendary Children” artists Blake England and Jon Dean. The resulting new photography and video collaboration is sure to be hit from the two talented, ever-evolving camps.

Now it's time for you to get in on the awesomeness. The queens of the show, led by the indefatigable Edie Cheezburger, are already working on their looks and concepts. During Friday’s off-center Disney-themed show, they announced the project to a packed house. On Tuesday, they launched the Help Illuminate the Other Show Kickstarter campaign to raise $2,500. Gifts for pledging range from video shout-outs to signed cast photos, custom buttons and t-shirts to Other Show performances of your very own.

Cheezburger is enthusiastic, to say the least. She says that the cast owes everything to the support that loyal groupies continue to show every week since the show's inception.

Celeste Holmes, Evah Destruction, Jaye Lish, Miami Royale, Violet Chachki and I have been creating costumes with Genre Mon Ster's help over the last month. We are collaborating with photographers/videographers Jon Dean and Blake England to make some fantastical art.

If you have some time, stop over to read about it. Also, check out some of the cool swag you could get when you donate. We're super excited about it. Thanks for supporting us! We couldn't do it without you guys.