Help! My exes and conquests are haunting me and I can’t move on! 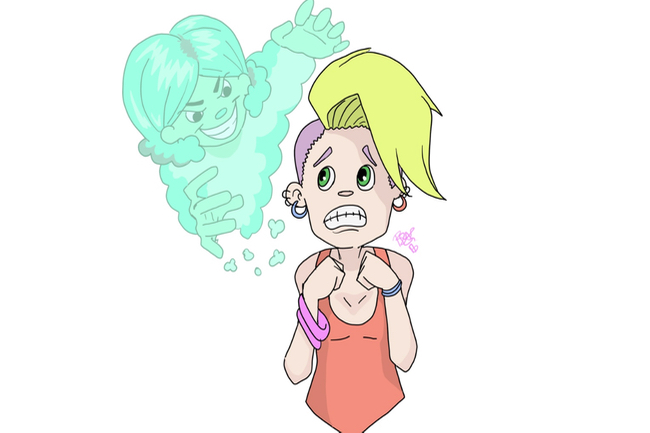 Falling out of love sucks, but if you're blaming your problematic ex or your multiple, emotionless, complicated conquests for the trouble, you're completely missing the 'you' of it all.

When we met, my ex’s natural charm was awesome. Of course, all that glitters in this queer world isn't gold, or hell brass for that matter. My Wonder Woman Lasso of Truth tingled early on that she might be trouble, but then falling for her over time clouded my judgment.

She ended up being paranoid and accusatory. It got ugly, and the whole thing ended badly. Two years after we broke up, she still gossips about me. A year ago, she called my work and told my boss lies about my character.

I’ve removed myself from social functions and venues to avoid her. I do still care for her, and I know she's capable of being a great person, but she has issues, including drugs, that exacerbate her low self esteem, paranoia, delusions and anger.

I'm tired of walking on egg shells. I reached out again to try and settle it, and I can admit my wrongs in all of this, but she won’t even try to meet me half way. How can I get her to listen and leave me alone?

Every time you stay home, every time you let her get to you, she gets the satisfaction of being a thorn in your side.

Getting her to stop haunting you is about exorcising your own demons, not hers. Set yourself free by truly moving on without her.

If she actually breaks the law, threatens you, or makes you feel unsafe, stop everything and call the authorities. But unless you’re in actual danger, your other behaviors only fuel her fire. Find a way to truly not care what she does or says.

Once she stops affecting you with the reactions she so desperately desires, she’ll gradually disappear and you'll gradually move forward.

At first, I laughed off bitchy comments from friends as jealousy of how much tail I get, but I’m starting to see a pattern and realize the grain of truth is that I start losing interest in guys the moment there’s even a hint that a sexual quest is conquered.

I’ve taken heat for being all about the chase, but now I realize it’s true. Even before sex, the more a guy hits on me, the more I wonder if they’re needy, have no confidence, or aren’t really that attractive.

Feelings kill my boner. When it comes to real dating, I can force myself to last about three months – because I really do want a relationship – but when I hear “I love you,” I’m out. Like, every time.

I used to be proud of my hit-em-and-quit-em reputation, but lately the pattern is just depressing. Help!

It’s pretty common to go “all in” at the beginning, when the sexual chemistry is at its most potent, and the newness brings mystery, novelty and infatuation out to play. It’s also normal for the excitement to wane.

It’s less common to give up entirely. Most trade the initial interest for an interest in sharing their daily lives, enjoying the camaraderie of a partnership, and making someone part of their ongoing priorities. Whether from fear of abandonment, internalized toxic-masc homophobia or sheer narcissism, you have a mental block to that last part.

Do you really want a relationship? Because your letter sounds like excuses to stay out of one.

Consider finding help if necessary to learn this: Feelings are human and good. Accepting them in others is key, and getting in touch with yours is a priority before you lead another person down Disappointment Road.

With a little work, you can break the pattern.

This article originally appeared in Q magazine. Pick it up around town each week at LGBTQ-friendly drop spots,and read the digital version below: