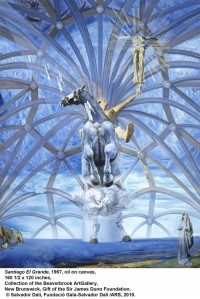 Salvador Dali and his art have always challenged critics, thinkers and art historians. Now the High takes on and conquers a rethinking of the often underestimated latter half of the modern master’s career in “Dali: The Late Work,” opening Aug. 7.

We’ve seen it. Don’t be jealous. All the better to preview you with, my dear. But before we do, a word about the opening night Surreal Soiree. Expect acrobats, stilt walkers, flowing drinks and a “wearable art show” featuring dresses decorated by 12 local artists. The dress artists include the quirky gay folk art of Grant Henry, aka Sister Louisa.

“I can’t wait to see what the other artists have done,” Henry says. “My contribution includes a special something for our community.”

The anticipation over the exhibit combined with so many extras may make Saturday the hottest ticket in town, and they’re burning a hole in our pocket. That’s right; Project Q Atlanta is giving away tickets to Saturday’s opening night Surreal Soiree. Read to the end to find out how you can attend for free.

While most people think of Dali paintings as all melting clocks and floating body parts, the artist went in a new direction around 1940 and continued to create and collaborate on compelling works that fed–and fed from–a cult of his own celebrity until he died in 1989.

“Dali’s work is often considered strictly from the perspective of his surrealistic works from the 1920s and ‘30s,” says Elliot King, a Dali scholar and the guest curator for this one-of-a-kind exhibit. “For some art historians, it’s as if he died in 1940.” 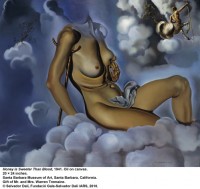 The Atlanta exhibit aims to change that perception. The 12,000-square foot exhibit includes one room of examples of Dali’s Surreal works to give a sense from whence he came, but the majority of the show then wows with where the artist went from there.

King, the High and a team of experts worked literally around the world to bring together more than 100 works—40 paintings, numerous drawings, videos, and even kooky jewelry and collaborative photographs—that have never been viewed all together until now. Some pieces haven’t been to the United States in more than 50 years, and a few have been in private collections since they were created.

“When we started to put together a dream list of work we thought would be good for a show on Dali’s later works, any one of them would have made me hop the plane to Atlanta to be a part of it,” King says. “We have four of them in this exhibit.”

The shining jewels in the “Late Work” crown include the mammoth 15-by-10-foot “Santiago El Grande” (top photo) which has lived in New Brunswick, Canada since 1959, and “Christ of St. John on the Cross” (bottom photo), which has a permanent home in Scotland. 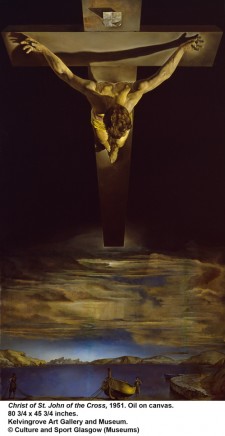 With a renewed interest in Catholicism, an obsession with nuclear physics and a reminiscence for his days as an ardent student of Renaissance Masters, Dali moved beyond Surrealism into what he called “Nuclear Mysticism” and “New Classicism.”

But as viewed through Dali’s eccentric lens, “classicism” is redefined. Like “Honey is Sweeter Than Blood” (middle photo), the “Late Work” at the High is still characteristically odd in its manifestations. The works retain the artist’s uncanny skill and the other-worldly perspective that draws in fans and keeps them riveted.

“The work was considered too kitsch, too commercial, but it’s actually quite profound,” King says. “The thought behind it was intense and deliberate. He was on the forefront of Pop Art and perhaps rubbed the established art world the wrong way by doing it for the money, long before artists like Andy Warhol made that part and parcel of their careers.”

Now about those tickets to Saturday’s Surreal Soiree: To become one of our randomly selected winners for a pair of tickets, {encode=”[email protected]” title=”e-mail”} us with the subject line “I Want Dali Surreal Soiree Tickets.” To qualify, include your first and last name in the body of the e-mail, and do it by Thursday, Aug. 5 at 6 p.m. We’ll contact the winners by e-mail to set them up.