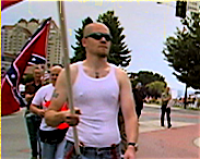 Georgia Equality leads the pack of locals commemorating Sunday’s National Coming Out Day. The documentary “Anatomy of Hate: A Dialogue for Hope” (photos) includes a post-discussion and reception with the filmmaker.

This year’s theme for National Coming Out Day is “Coming Out Spiritually,” so the Georgia Equality event at 14th Street Playhouse and Einstein’s will not only include a discussion of the disturbing but important documentary with filmmaker Mike Ramsdell, but also members of the Faith & Community Alliance. The panel will be led by local clergy Rabbi Joshua Lesser of Congregation Bet Haverim, Pastor Bradley Schmeling of St. John’s Lutheran Church, and Rev. Maressa Penderman of Unity Fellowship Church.

“In keeping with this year’s theme, the message we hope to send to the Atlanta faith community is that we’d like them to recognize many members of our LGBT community are also quite spiritual, and we don’t want them to abandon us,” Jeff Graham, executive director of Georgia Equality, says in a written statement.

“As for our own members, the message is, ‘It’s time to stop talking to buildings and start talking to people,’” he says. “We’ve spent a lot of our political efforts organizing marches and rallies, which have brought our civil rights issues to the forefront for legislators. But we can’t allow ourselves to get caught up only in protesting and not dialoguing with others.” 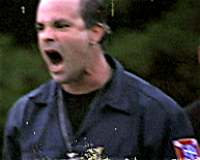 After the film, director Ramsdell will use themes from the film to engage panel and audience members in an action dialogue, exploring attitudes and feelings about spirituality, fear, hate and hope.

The reception at Einstein’s begins at 6:30.

National Coming Out Day commemorates the 1987 march on Washington, D.C., when an esitmated half-million people gathered in support of LGBT rights. Each year, hundreds of events take place nationwide, including the National Equality March scheduled in Washington on Saturday and Sunday.