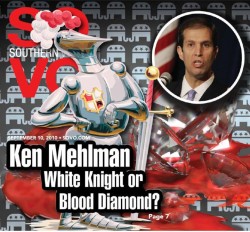 Where in the world is Southern Voice? Maybe still on summer vacay or hitting Pride fests around the Southeast. But we haven’t seen a fresh issue of the weekly since Sept. 10 — and even that was delivered a few days late.

It’s not without precedent for SoVo to go missing for a spell. The staff skipped an issue in June while they enjoyed Gay Days in Orlando. They missed some issues in May, too. And, after all, the debut of the paper under its new owners was pushed back and back again.

Anyway, even that issue arrived at Midtown distribution boxes three days late. A week earlier, the paper surfaced with its “Still Shopping at Tar-gay?” edition. But that was a recycled effort – scrubbed clean of some of its “allegedly” plagiarized content – from Aug. 26, when the issue was created electronically but never printed. Once the Sept. 3 issue – with an identical cover from a week earlier, save the issue date – surfaced, the Aug. 26 issue was pulled from its website.

Now SoVo has missed two issues – Sept. 17 and 24 – without comment from their publisher. Maybe they are on vacay, resting up for Pride even though they are shut out this year’s festival.

Should someone file a missing persons report with the new LGBT liaison for Atlanta police? He started his new assignment on Thursday.