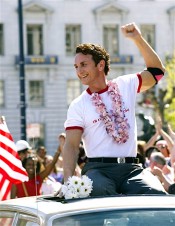 You think you know the story. The movement, the man, the murder, the martyrdom and the movie. But the musical? It was only a matter of time before a return to the stage since its 1991 Atlanta debut.

We’re starting to get really excited about “The Harvey Milk Show” at OnStage Atlanta just as the city gets amped for Pride month. The local production starts tonight, and all of gay Atlanta is buzzing about it.

What? You haven’t heard? This show about gay rights hero Harvey Milk (top photo) is only in every gay rag in town, and they’re all a-twitter on Twitter. But that’s cool; we’re here for you.

So. If you didn’t see the preview in Southern Voice or the thorough piece in David magazine, here’s the skinny: the musical by two Atlantans, which debuted at Actor’s Express back in the day, is mostly biographical with some fictional twists in its depiction of the last decade in the life of the slain gay politician/coming out advocate.

The real Milk had at least one love of his life, and way more than a few trysts. But this show balls them all up into one character named Jamey. Hey, boyfriend plots would just muck up the time for pop-rock song and dance goodness. 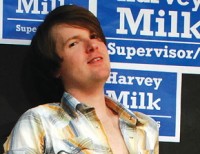 In this production, Jamey is played by Bryan Lee (bottom photo). The troubled, homophobic murderer Dan White is played by another gay actor, Jeffrey Brown.

With a gay man playing straight and a cast full of other gayfers, OnStage mixes it up even more with straight actor Geoffrey ‘Googie’ Uterhardt in the title role. Uterhardt’s wife directs.

“It’s a challenge, and it’s kind of frightening,” Uterhardt tells David. “It’s a little different when you’re playing a made-up character, because of course you’ve got the freedom to take it where you want to. But Harvey Milk was such an inspirational character and such a distinct personality, and of course was very important to the gay rights movement, so it’s been quite a challenge.

“I want to make sure that I do justice to not only the historical character that we know, Harvey Milk, but that I am right in portraying what he was all about, the spirit of Harvey Milk,” Uterhardt adds.

We’re just glad to see the return of this show keeping Milk’s story alive. New generations should always be reminded of this particularly inspirational man, myth and movement — with music!