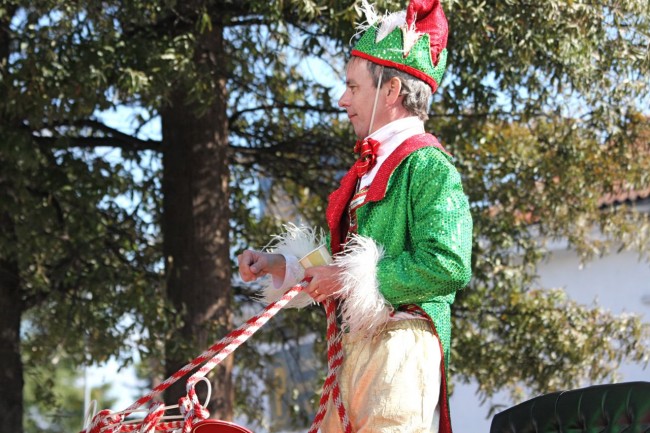 When the holiday rush begins, Harold M. Leaver jumps from real life into a role that has become uniquely his own. For the 11th year, he stars in the Horizon Theater seasonal tradition, “The Santaland Diaries.”

For most of the year, Leaver (top photo in the Nov. 1 Atlanta Pride parade) is content to teach drama appreciation and occasionally take an acting gig here and there. But for more than a decade now, the holiday season means Leaver becomes Crumpet in Horizon’s “Santaland,” based on gay satirist David Sedaris’ book “Holidays on Ice.”

The story details the writer’s real-life stint as a department store elf in need of money one holiday season. Playing Crumpet hasn’t merely given Leaver a comfy holiday gig; it’s made him something of a local icon. 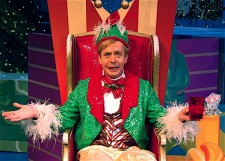 Looking back, the openly gay actor says no one involved with the play had any sense the comedy would take off the way it has. What started off as a staged reading has become an edgy alternative to normal holiday fare, as well as a production that sells out most of its annual run.

Ironically, Leaver recalls that he never even auditioned for the role. Horizon artistic director Lisa Adler thought he would be perfect. When she described the role as a bitter elf, he wasn’t quite sure how to take that, yet he feels his sensibility, his view of the world, and his ability to tell a story has been the key to his success.

Having performed the show so many times, Leaver doesn’t need more than a few weeks to prepare and adjust to each year’s new set and cast changes.

“It’s just a matter of diving right in,” he says.

Over time, to keep the show fresh, the actors throw in current references each year and often up the gay ante, including scenes with Crumpet’s male lover.

Among the new references for the 2009 production are a dig at singer Chris Brown—“I don’t like to make light of domestic violence, but we had to put this in,” says Leaver — and celebs who have twins, such as Sarah Jessica Parker and Matthew Broderick. “I couldn’t even take care of one kid much less two,” he quips. 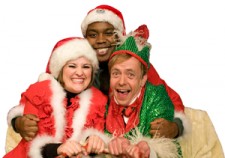 During the off season, Leaver jokes that he eats healthily and works out to keep his elfin figure. Leaver admits that oftentimes he is recognized, sometimes in unorthodox places.

“I go to [clothing optional gay campground] River’s Edge, and people ask me if I’m the elf,” Leaver laughs.

The performer says that a large percentage of the audience—besides gay men –are yuppie women. Oftentimes, once he has a sense of the audience make-up, he will tailor certain jokes to the “gay boys or the dirty minded women.”

Comparisons to Crumpet are inevitable, but Leaver says he is nowhere near as biting as the character.

“I say the things he says inside but not outside,” he admits. “I don’t think I am as snarky as Crumpet; I don’t comment on people. I think I have gotten more mellow.”

The actor feels that Sedaris, too, has gotten more heartfelt and more family-oriented over the years.

Leaver says he sees some of the same patrons year after year, and returning patrons know some of the tricks.

“They look for the same, but also look for what we do differently, the new touches. Three gay guys who had already seen the show came back and knew not to sit up front,” he laughs, noting how he is prone to audience interaction.

The actor also says he is in no rush to leave the role.

“It’s still something I really enjoy doing,” he says. “I will continue to do ‘Santaland’ as long as it’s fun or I’m too old for the part.”

“The Santaland Diaries” runs Tuesdays through Sundays at Horizon Theatre through Jan. 3. Call the box office at 404-584-7450, or order online.