The team, which kicked off its season in early August, puts a wrap on its home schedule Saturday with a double-header in College Park. Then it’s off to Boston next weekend before — hopefully — a playoff spot in the first round of the USA Rugby championships.

But to boost their playoff chances, the team needs to notch a win over Orlando on Saturday at 1 p.m. And to help their cause, the Harlequins want to rally rugby fans to attend the match and cheer them on. 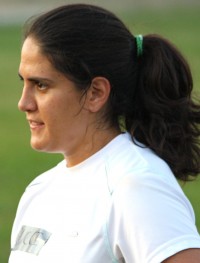 “If we do not win the Orlando game, we are not making it to the first round of nationals,” says team member Stephanie Iacobucci (photo). “I’m hoping for a little bit of sun at some point. Come watch. It’s entertaining and it’s constant movement. You won’t be bored.”

The Harlequins fielded two squads this season — their A-side team and a developmental squad — though with a limited roster, some team members see match time with both. The A squad notched a 31-21 win over Philadelphia Sept. 12, but dropped a Sept. 19 match against Northern Virginia.

“The season is going along pretty well. We are much stronger than we were last year. We have not retained as many new people as we would like. But the ones we do have are doing well,” Iacobucci says.

When the current season ends, the team will look ahead to its next season in early 2010, a more relaxed affair that includes a trip to Savannah for an annual rugby tournament during the city’s rowdy St. Patrick’s Day celebration in March.

“Rugby is not for everyone, but it can accommodate anyone who wants that type of contact,” Iacobucci says.