Happy birthday to you, Brushstrokes 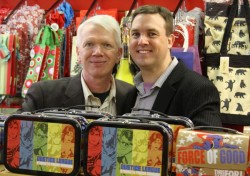 From its nondescript start on Highland Avenue, Brushstrokes has matured into a 4,500-square-foot retail space in prime view of the gayborhood. On Wednesday, the store that sells most anything a gay shopper could want turned 21.

Co-owners Mark Jackson and Tom Schloeder (photo left to right) marked the occasion with staffers and supporters at the store, dishing out cake and anecdotes about how the business, which opened Dec. 1, 1989, has survived three moves, a couple of recessions and increased competition to become one of the nation’s largest LGBT retailers with a stock of more than 40,000 items.

“We have grown in several ways every year and now have the largest and most diverse selection of merchandise we’ve ever sold,” Jackson and Schloeder said in a prepared statement ahead of the occasion. “We think the secret of our success is to quickly adapt to our customers and the marketplace. Who would have thought five years ago that underwear would be one of our bigger sales lines? But today it is.”

Underwear, you might ask? Um, yes. It’s a store for the gays after all, and Brushstrokes isn’t afraid to strut around in their briefs. They did exactly that with Mary Edith Pitts and a host of models tucked into Frank Dandy briefs in July.

On Wednesday, we were hoping for a few adult film stars to blow out the candles on the birthday cake. That was the scene in October when a trio of stars were on hand to raise bucks for HIV charities.

But alas, not this week.

Instead, Brushstrokes made their birthday occasion meaningful in another way: The store is donating a portion of its sales in December to the Atlanta Pride Committee, Jerusalem House and Pets Are Loving Support. All you need to do, dear gay consumer, is tell the cuties at the register your charity of choice. Additionally, snatch the coupons advertised on Project Q (or in Ga Voice or David magazine) for an additional 21 percent off your purchase.

Twenty-first birthday and 21 percent off. Get it?