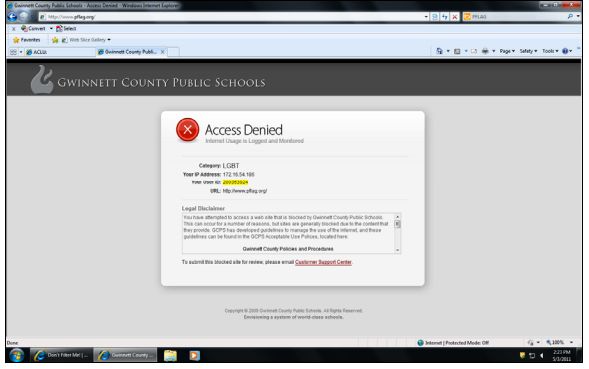 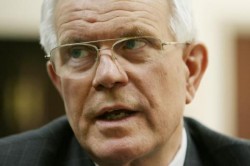 Gwinnett County Public Schools seems nonplussed by threats from the ACLU that it could be sued for flipping on a filter that is censoring LGBT websites across the computers of Georgia’s largest school system.

The ACLU of Georgia detailed the threat in a five-page letter on May 23 to Gwinnett Superintendent J. Alvin Wilbanks (photo). Ten days later, the school system replied with a three-sentence statement saying it’s looking into the ACLU’s concerns and that, yes, it does filter Internet content.

“If you continue to censor these websites, you could be subject to legal liability and the expense of litigation, as the boards of education and superintendents of two Tennessee school districts that used a similar type of filtering software recently discovered,” Chara Fisher Jackson, ACLU of Georgia’s legal director, and Joshua Block, a staff attorney with the ACLU Foundation, write in the letter.

“Ultimately, after being sued by the ACLU, both Tennessee school districts agreed to enter into a settlement agreement enforceable by the federal district court to stop blocking access of online information about lesbian, gay, bisexual, and transgender issues,” Jackson and Block add.

The letter came as part of the ACLU’s “Don’t Filter Me” project targeting public high schools that block LGBT websites, arguing that doing so violates First Amendment rights to free speech and the Equal Access Act, which requires equal access to school resources for all extracurricular clubs. The effort has prompted at least one major web filter provider, Lightspeed Systems, to drop a category that blocked LGBT sites.

In Gwinnett, the ALCU alleges that software from Blue Coat blocked access to sites including It Gets Better Project, the Georgia Safe Schools Coalition, PFLAG, GSA Network and the Gay, Lesbian and Straight Education Network (top image).

Nowmee Shehab, a recent graduate at Gwinnett’s Brookwood High School, tells Duluth Patch that a few weeks ago, the school’s webs filter was changed to start blocking LGBT sites she accessed for her work as president of the school’s gay-straight alliance.

“Students need to be able to find information about their rights and about suicide and bullying prevention, and now they’re not able to get to information that’s really important for them,” she says.

The school system released a statement about the ALCU letter on Thursday:

“We have received the letter from the ACLU and are looking into the concerns raised. Following guidelines from CIPA (Children’s Internet Protection Act), the school system does filter Internet content. That said, if a student or employee needs access to a site for a legitimate instructional or work purpose, they can make a request for that access.”