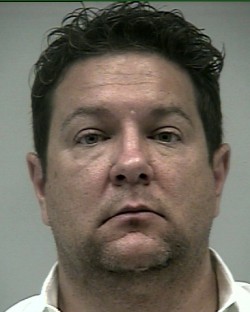 An Atlanta man who is president of a gay business group and longtime supporter of an HIV charity was arrested in June and remains in a Gwinnett County jail on felony charges that he stole a vehicle from his former employer. Brent Jon Fogleman, 38, also faces a charge in Clayton County of violating his probation from a past first-degree forgery case. Gwinnett police arrested Fogleman (photo) on June 16 after he talked with an investigator about the theft allegations. He was booked into the Gwinnett County Detention Center, where he’s been held without bond since his arrest, authorities said. Fogleman became board president of the Atlanta Executive Network in January and has served on the board for about three years. He recently asked for – and was granted – a leave of absence from the AEN board, according to Justin Ziegler, the group’s executive director. Ziegler says Fogleman requested the leave several weeks ago. Fogleman also supported the Atlanta Cotillion, which raises funds for AID Atlanta through its annual debutante season. He served as a debutante in 2005 and made large donations to the effort in 2009, according to organizers. The Atlanta Cotillion has donated more than $620,000 to AID Atlanta since its inception. On June 16, Fogleman talked with a Gwinnett police investigator about allegations that he stole a vehicle from his former employer, Sunbelt Office Products. Officer J.R. Madsen wrote in an incident report that Fogleman’s answers made the investigator more suspicious. “The answers he provided to my questions were rather incriminating,” Madsen writes. “I told Fogleman that I needed to contact the assistant district attorney and present the circumstances to them. It would ultimately be up to them if they wanted to go ahead with the prosecution.” After discussing the case with a prosecutor, Madsen returned to the room and asked Fogleman if he would sign a waiver of his rights. Fogleman refused to sign and declined to answer additional questions. He was arrested on two charges of theft by taking. His gold, 2004 Mercedes 500 Series was impounded when Fogleman was arrested. Fogleman's cell phone voice mail was full on Tuesday. A spokesperson for Lonesource, the Cary, N.C.-based company that acquired Sunbelt in 2008, said Fogleman has not been an employee of Lonesource or Sunbelt since March 2010. The spokesperson declined further comment. Fogleman apparently had served as chief financial officer for Sunbelt. The company’s website lists the Greensboro, N.C.-native as “bean counter” who’s interested in college basketball, golf, traveling, cooking and jet skiing. Fogleman writes on the site that the company's family environment is what he likes best about working at Sunbelt.

I know that everybody says this, but honestly it is "Team Sunbelt, " the people who work here are really a family. We care for each other and are very supportive because we want to see everybody do well. It is a positive enviroment to be around, and it is easy to learn and grow.

Ziegler says that Alex Page, AEN’s vice president, will serve as president during Fogelman’s leave of absence. “As far as AEN is concerned, it’s business as usual,” Ziegler says.