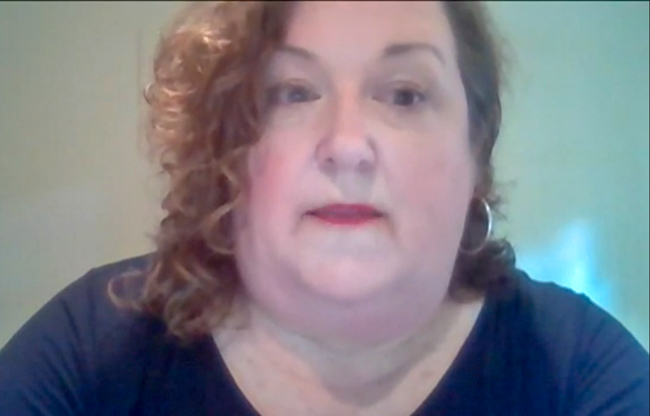 School officials in Gwinnett County told a teacher that her Black Lives Matter poster was a “disruption to the learning environment.” She keeps it up in part because her child is LGBTQ.

Paige McGaughey (image), an eighth-grade language arts teacher at Crews Middle School in Lawrenceville, placed the poster in her class in late August. She wanted to show Black students that she is an ally in the fight for racial justice, according to the AJC.

“All children matter to me,” she said. “As the mother of a gay child, I wish more teachers had embraced my child’s ‘differences’ in school. If they had, middle school may have been a bit easier for my child.”

Two parents complained to the school’s principal about the poster in the background of a video conference with students. The principal told McGaughey about the complaints but did not ask her to take down the poster, according to a district spokesperson.

“Our employees do have the same civic responsibilities and privileges as any other citizen, including actively supporting causes,” Gwinnett County Public Schools spokesperson Sloan Roach told Project Q Atlanta.

“However, that is not usually done in the workplace, as it can become an effectiveness issue if it creates a disruption to the learning environment,” she added.

Parents thought the teacher was indoctrinating their children, and they worried she would only teach “Black stuff,” McGaughey told the AJC. She told 11 Alive that she only wants to create a welcoming atmosphere.

“I have things in my room that support the LGBTQ community, students of different faith,” she said. “True learning can’t take place if students don’t feel like you care about them.”

Everton Blair, the first person of color and first openly LGBTQ member of the Gwinnett County Board of Education, supported McGaughey.

“Any teacher who wants to assert that Black Lives Matter is doing an uncontroversial act of basic decency,” he told Project Q Atlanta.

More than a dozen students and teachers sent messages thanking the teacher for the poster, according to McGaughey. She declined Project Q’s interview request.

The Stonewall Bar Association of Georgia granted $11,000 each to three Atlanta non-profits that fight for housing, healthcare and education for Black transgender people. The...
Read more
News

Some might say that this coming Tuesday is the most crucial day in years for queer safety, rights and survival. It’s time to flick...
Read more
Load more
17,369FansLike
5,928FollowersFollow
7,639FollowersFollow