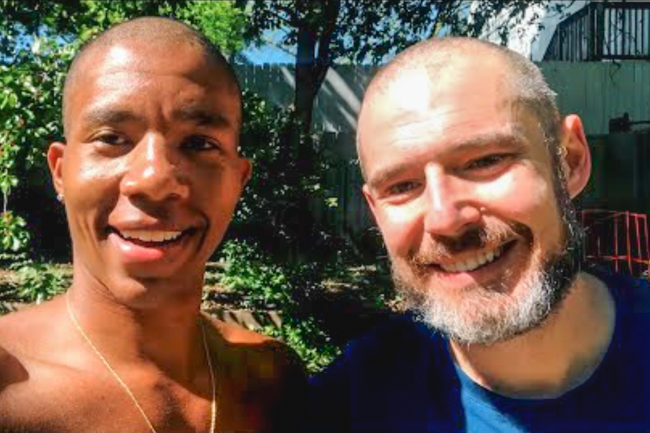 “We didn’t know what to expect, both in terms of filming ourselves alone and in terms of our total ignorance on how to cut hair,” says Jonathan Russell, who sits down for “a little off the top” from his fiancé Michael Tanner in the just-for-fun video. (Watch below)

“We thought, ‘What’s the worst that could happen? It’s not like we’re leaving the house at all,’” he adds.

The Atlanta guys wind up with the most entertaining results among the participating couples. After Russell gives Tanner a serviceable alternative to staying shaggy, Tanner’s first swipe with the clippers turns an intended trim into a full buzzcut for Russell.

In the video, the “victim” is not amused, but “a shaved head grows back” and all’s well that ends well, Russell says.

Tanner asserts that one saving grace is that Russell’s result, while unintended, looks good on him.

“We’re both surprised at the positive response to Jonathan’s shaved head,” Tanner says. “Someone in the comments even called Jonathan ‘a silver fox.’”

The fiancés have been locked away together in quarantine, and both say that the video was fun to do.

“We’ve taken the quarantine and social distancing very seriously,” Russell says. “We both work in infectious diseases – Michael in digital marketing for HIV medications and I in fundraising for vaccine research at Emory. It was an unusual activity and a much-needed distraction.”

“It’s a fun story that’s a change of pace from all the gloom and doom in the world,” Tanner adds.

Watch the video, then you can click through for more gay male culture funnies on Grindr’s “Into More” YouTube channel.