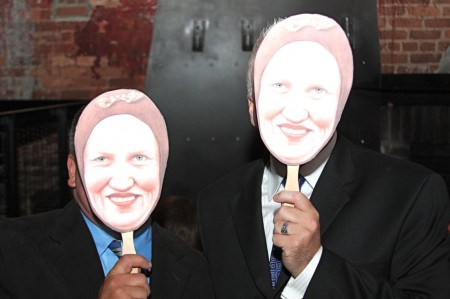 A sold-out crowd was on hand Sunday for opening night of “Grey Gardens,” the Tony-award winning musical making its Atlanta premiere.

The production begins its run as the nation continues to mourns the loss of Sen. Edward Kennedy, who died Aug. 25. Kennedy’s older brother Joe plays a small role in the opening act of the musical, which is set in July 1941 at the 28-room Grey Gardens estate in Long Island, N.Y.

The play follows the lives of Jacqueline Kennedy-Onassis’ flamboyant aunt Edith Bouvier Beale and her daughter “Little Edie.” Mother and daughter cling to each other through hysteria, happiness and heartbreak as the home around them falls into disrepair.

The deliciously eccentric characters make the play a rite of passage for many gay men, who filled the audience on Sunday and enjoyed a reception with the cast after the performance.

“Grey Gardens” continues its seven-week run, Wednesdays through Sundays, until Oct. 10. The musical is directed by Freddie Ashley (photo).