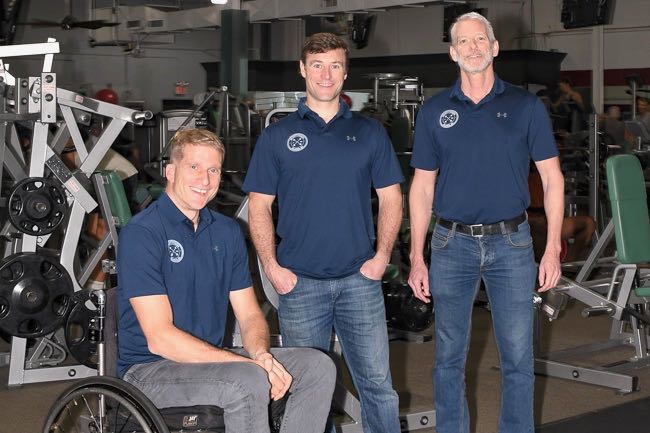 Less than five months after Aaron Pols, David Goldstein and Ken Penvose bought Gravity Fitness, they faced their first big test as owners — a pandemic temporarily shutting the gym down.

They closed a day before Atlanta Mayor Keisha Lance Bottoms’ March 19 order that shuttered every one of the city’s bars, clubs, gyms, movie theaters and other in-person venues.

“It was the first really big decision that we had to make,” Pols (photo center, with Goldstein and Penvose) told Project Q Atlanta.

The LGBTQ favorite gym reopened in May with a battery of new precautions to keep members and staff safe. There’s a 25-person limit with visits by reservation only, temperature checks at the door, masked employees and an increased number of sanitation stations. Members also receive spray bottles to clean equipment after use, and the staff cleans the spray bottles and yoga mats between each use.

“The gym has never been cleaner,” Pols said. “Our cleaning crew’s job has probably gotten easier. You could slide off some of this stuff it’s so clean.”

Gravity also instituted a mask requirement for visitors about a month before Bottoms issued a citywide mask mandate.

“We knew it was the right decision,” Pols said. “It’s ended up being great for us, because a lot of people have chosen to join us because of the mask policy. I get stopped and thanked constantly, at least a couple times a day, for all the protocols we’re doing. People will tell you the mask policy is the only reason they’re there.”

The response from members has been “overwhelmingly good,” and business has not been significantly impacted by the pandemic, he continued.

“We’re definitely down from where we had been, but I couldn’t be more pleased with how we’ve navigated so far from that perspective,” Pols said. “I see no reason why we couldn’t come out of this even better.”

Gravity received a Payroll Protection Program loan from the federal Small Business Administration, which allowed the owners to keep nearly all of their employees. The facility’s landlord also deferred some of the rent, and the owners put off getting their first paychecks since taking over the business.

“We’re like, ‘You know, it would be better to keep this money in the bank, who knows how long the shutdown will last?’” Pols said. “So we weren’t able to get paid as owners, but we were able to keep all of our employees paid.”

Pols is more worried about the recent spike in coronavirus infections than he is about a possible second wave in the fall.

“But I don’t think we’re shutting down the economy as a whole a second time,” he said.