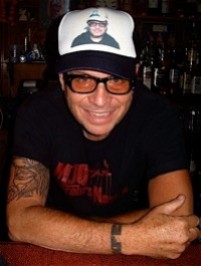 If “celebration of life” sounds more appealing to you as a bar, restaurant and lounge, gay artist Grant Henry and his alter ego Sister Louisa have opened the doors on your salvation: Sister Louisa’s Church of the Living Room and Ping Pong Emporium.

Worship the concept and the continuation of Henry’s longtime tongue-in-cheek take on art (photos) and life with his mantra “Come on in, precious” in full play. A multi-time winner of Creative Loafing’s Best Bartender title for making Monday nights at the Local a happening, Henry (top photo) and Sister Louisa got their own digs with the hot new Old Fourth Ward establishment.

The Edgewood Avenue space sets up confessional in the former home of the now-shuttered Danneman’s Coffeehouse after its Last Supper, so to speak. Its funky, welcoming vibe is open 5 p.m. – 3 a.m. Monday through Saturday, and 5 p.m. to midnight on Sunday.

Henry started making his move from underground guru to the mainstream consciousness when his real-life adventures started making print in the Creative Loafing weekly column by his good friend, writer Hollis Gillespie. His appearances as “gay Grant” in Gillespie’s musings extended later into her hilarious books about life in the ATL.

As his artist alter ego Sister Louisa, Henry’s artwork often twists religious icons and folk art in a mixed-media bonanza that boasts quite a fan-base.

Church, as its affectionately called for short, is already the buzz of Atlanta’s underground scene, and the proprietor is making the most of the name, inviting people to Sunday “services” and Church Organ Preach It Karaoke with bar offerings like Spiritual Sangria.

Does the irreverence strike you as too much? It’s all part of what Henry refers to as “true spirituality.”

“The truth is that Sister Louisa’s Church of the Living Room & Ping Pong Emporium is a testament to the core of what MLK & Jesus died for, not a revolt against their beliefs,” Henry says. “Church on Edgewood is all about love and welcomes the conversation that is about to ensue.”

Food for as little as $3 and only as high as $8 means you can munch while you embibe, and Henry himself holds court. He’s even hosted guest bartenders including gay crimefighter and former mayoral candidate Kyle Keyser.

And yes, there’s Ping Pong at Church of the Living Room & Ping Pong Emporium. Henry will “kick your ass” as the resident champion, he says.

Church is quickly becoming the place to be for Henry’s sizable following, and the concept grew out of his irregularly scheduled Sunday get-togethers last year to showcase art by himself and others at his loft–literally the church of the Living Room.