Any time we want to remember who’s bitchier than us, we surf over to Salon.com. As usual, we are 100% down with their take on Sunday’s Grammys and the indefatigable Lady Gaga–based on what we saw when we weren’t checking e-mail or in another room.

We love Salon for their snarky takes on current events and news of the day, but we also feel sorry for them. Especially Salon Culture Editor Sarah Hepola, who had to pay close attention to the (seemingly) 17-hour broadcast in order to choose and write up the 10 Best Grammy Moments. She deserves overtime and a bonus in addition to her usual pay for enduring it.

Moments worth seeing included Beyonce stealing the night, Taylor Swift’s teary-eyed acceptance speech, and of course, The Gaga (top photo, counterclockwise from left)–if you were willing to wait through the muck. 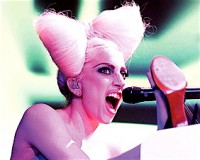 But start by putting Lady Gaga (second photo) onstage, and our people will almost stop brushing the dog—hell, even stop having sex—long enough to watch. Her first costume of the night featured sleeves that left us goo goo for Gaga puffs.

From there, the Salon report does not disappoint, kicking off their Grammy list with the entirety of Gaga’s shenanigans.

10. Lady Gaga, the fame monstah
There she was on the red carpet wearing a Christmas tree ornament by Armani. There she was onstage, like the spawn of Flash Gordon and Christina Aguilera. There she was in the audience, patiently losing all major awards while wearing the Chrysler Building. Love her or laugh at her, it’s fantastic to see a performer who needs less double-stick tape for her outfits than Elmer’s Wood Glue.

Her opening performance of “Poker Face” had a bit of grating gimmickry — including a hype man crying “she’s a monstaaah!” — but it was forgiven when she reemerged onstage with Elton John to perform a moving version of Gaga’s “Speechless” that segued into Elton John’s classic “Your Song.” Two flamboyant, glitter-loving freaks turned gay icons: Now this is how you open a stuffy awards show.


In advance of the show, the Wall Street Journal, one of the few print publications with the budget to pay investigative reporters, did an excellent in-depth piece on the Gaga phenomenon and its implications for American music, style and—oh shit—culture itself.

Underneath Gaga’s haystack wigs is a case study of what it takes to succeed in the music business today.

Gaga, 23 years old, has made shrewd use of new digital platforms, while still leveraging the clout of a major label, an institution deemed obsolete by many proponents of DIY culture.

She is a product of a new kind of recording contract which goes beyond just selling records to encompass everything from touring, merchandise–even her make-up deal. Though she writes her own material, she is as focused on visual theatrics, fashion, and global appeal as she is on the music.

The article is a perfect primer, if not for the Grammys, for details on the lady behind the Lady. Combined with Salon’s 10 Best Grammy list, it’s enough Gaga to wet your gay panties. It’s also way better than actually watching the Grammys.

One thing is certain: it’s hard to follow Gaga. But Salon continues its list with moments like “P!nk du Soleil,” “No country for Old Superstars” “Sasha Fiercest” and “Michael Jackson’s Death: Now in 3-D!”
Taken together, you’ve got a list that hits all the right notes–even if the Grammys and the pop music industry cannot.