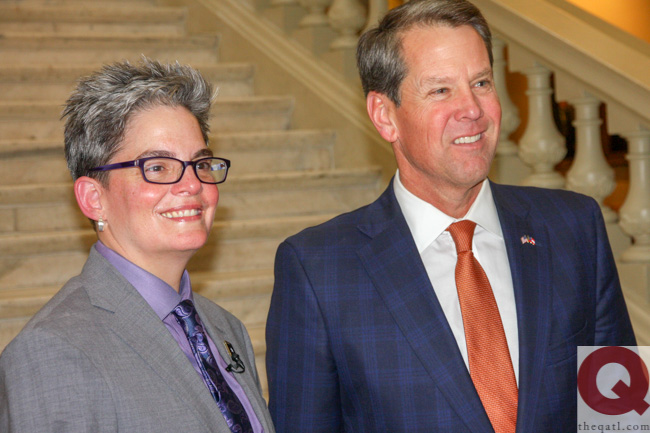 Kemp (photo right) praised Duncan’s record as a judge for the Gwinnett Magistrate Court and the Chamblee Municipal Court.

“Judge Duncan has clearly stood out in her work ethic and her experience,” he said. “I know that she has impeccable credentials, and quite honestly the right expertise to serve the great people of Gwinnett County.”

The ceremony at the state capitol was attended by a number of federal, state and county judges. Duncan’s wife, Michele Tainter, held the Bible as she took the oath of office.

“It matters because there likely are people similarly situated that don’t have the courage, or think, ‘Hey, maybe I can’t,’” she told the crowd. “If I have the opportunity to be an example, then I am honored to have that opportunity and I am glad to be able to do that.”

Duncan’s spot on the Gwinnett County Superior Court bench was created by the state legislature in 2019. Kemp announced her appointment in November.

Duncan told Project Q Atlanta it was “a tremendous honor” to be the first openly LGBTQ judge appointed by Kemp, a Republican who took office in 2019. And she said his support of anti-LGBTQ “religious freedom” bills didn’t make her question whether to accept the position.

“I don’t think you can ever say that politics is not involved, but it appears to me based on his track record that he does what he thinks is right regardless, and I think that takes courage,” she said.