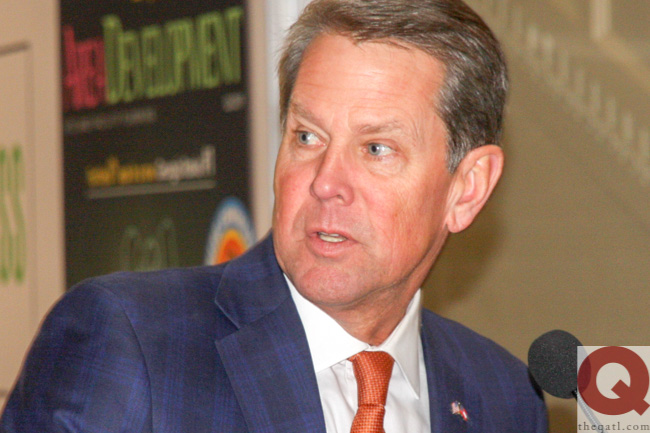 Kemp (photo) introduced the overhaul during his annual State of the State address on Thursday at the State Capitol.

“We will triple the adoption tax credit from $2,000 to $6,000 to help new parents offset the incredible costs of adoption,” he said. “We will lower the adoption age from 25 to 21 so more qualified Georgians can adopt and more children can be placed.”

Kemp also announced the launch of the Families First Commission, which would change the way the state’s foster care system operates.

“Our goal is simple: to keep our kids safe, to encourage adoption, and ensure that every young Georgian – no matter where they live – has the opportunity to live in a safe, happy, loving home,” he said.

As lawmakers looked to revise the state's adoption laws in 2017, an anti-LGBTQ amendment to a reform bill would have allowed faith-based agencies receiving public funds to refuse to serve LGBTQ parents. The amendment killed the bill.

Kemp told the AJC earlier this month that he would address any anti-LGBTQ provisions to adoption reform legislation “when the time comes.”

“My focus is not on poison pills,” he said. “It’s on making it easier for people to adopt foster care children. We’ll deal with those individual concerns as legislators have them.”

“I thought it was incredibly ill-conceived and offensive that one of the most important pieces of legislation that we passed that year got hung up in the Senate over that issue and I will advocate very strongly that that not get hung up again,” Ralston said.

“That’s exactly what happened a couple years ago,” he said. “Folks had worked on a bill for several years, had gotten it through the House with no problems whatsoever, and in the Senate it was 100 good pages and they added two bad pages at the end that caused the entire thing to fall apart.”

Graham said Georgia Equality will closely monitor legislative efforts on adoption reform and other LGBTQ issues. The organization hired political consultant Wendi Clifton to lobby during this year’s session. Graham is also a registered lobbyist and will frequent the State Capitol.

“I hope we can keep the focus on what is in the best interests of the kids in our foster system here in Georgia and drive home the point that it is not the sexual orientation or the gender of the parents; it is the love and support that they provide to the kids,” he said.

“Children will always be better off in a foster or adoptive home than in the foster care system,” he added.

Watch Kemp’s State of the State address below: