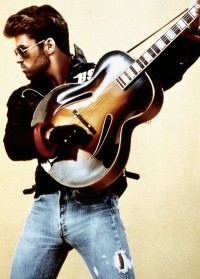 George Michael may be a punch line to some thanks to a string of arrests and gay sex scandals, but people of a certain age remember fondly when he topped the charts with “Faith.” Finally, a remastered version released on Tuesday.

The year was 1987, and after a wildly successful string of singles as part of pop duo Wham!, Michael released his first solo album. The lead single, “I Want Your Sex,” was extremely controversial in the Reagan-era ‘80s. In many radio markets, including Atlanta, the song was re-dubbed “I Want Your Love” and even though the single reached No. 2 on the Billboard Hot 100 Singles Chart, “American Top 40” host Casey Kasem refused to say the name of the song, introducing it only as “the new single by George Michael.”

“I Want Your Sex” started a phenomenon that continued with hit singles “Faith,” “Father Figure,” “Monkey,” “One More Try,” and “Kissing a Fool,” that all reached No. 1 on various Billboard charts. The album reached No. 1 on the Billboard 200 Albums and R&B Albums Charts, and supplemented by videos of Michael (photo) shaking his ass and cavorting with supermodels, became firmly ensconced in the American zeitgeist.

Thanks to the wonders of technology, new generations of music lovers can now enjoy those hits and other songs like “Hard Day,” “Hand to Mouth,” “Look at Your Hands,” and “A Last Request (I Want Your Sex – Part 3).” Also remastered are B-sides and 7” and 12” remixes, including “Fantasy,” two covers of Stevie Wonder hits “I Believe When I Fall in Love” and “Love’s in Need of Love Today” performed by Michael in concert, the Shep Pettibone Remix of “Hard Day,” and three versions of the Jimmy Jam and Terry Lewis remix of “Monkey.”

The album is available in three formats: a two-disc set featuring the remastered album and the B-sides and remixes; a double disc with remastered music and promotional videos including the uncensored version of “I Want Your Sex”; and a limited edition boxed set only available from Michael’s website. The latter comes complete with a 60-page hardback book, art prints and various memorabilia as well as album and DVD, all for the bargain price of $141.57. The other formats are available at iTunes and retailers like Atlanta’s gay-owned Outwrite and Brushstrokes.

Unfortunately, the only way to own the fierce Freemasons Remix of “I Want Your Sex” is to purchase the limited edition boxed set, but maybe album sales will go well and Sony will cash in on a remix album with new versions of tracks from “Faith.” A boy can hope, right?

Ultimately, this reissue is a great testament that scandal does not completely tarnish talent. Hopefully, Michael can regain some of his credibility since he is truly one of our most under-appreciated musicians. “Faith” was a triumph and can now be enjoyed again in all its renewed glory.