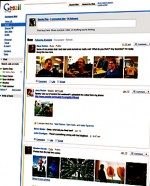 With millions joining the Gmail revolution over the last couple of years, Google took the typical “do whatever we want” juggernaut approach when it launched Google Buzz to compete with Facebook and Twitter.

Many Gmail users are just finding out that Google Buzz automatically enrolled them, linked all their Gmail connections to each other and made them public. If you use Gmail, you may already be following people you email and chat with, and they are following you—like your mom, your coworkers and that pesky ex of yours.

To make matters worse, by default, those connections are public. Your e-mail address book is your friends list—automatically.

What’s a little more Big Brother in the Internet Age, you say? Ask the woman whose abusive ex found her home address and workplace.

If it’s still not clear to you what this might mean to LGBT Gmail users, the blog Queerty offers six ways Google Buzz’s presumptive maneuvers can screw over us queers.

• Your web-based cheating and flirting was just exposed.

• Your mom just learned about your interest in gender reassignment surgery.

• Your party pics are now a public exhibit.

• Your stalkers just found you.

The Electronic Privacy Information Center is all over it, and Google has already made some changes, including making the Google Buzz “hide” button more prominent. You know, so you can decide if the contacts they selected for you—on the site they signed you up for—are to your liking.

In a Wall Street Journal interview Friday, a Google product manager says “It’s still early, and we have a long list of improvements on the way. We look forward to hearing more suggestions and will continue to improve the Buzz experience with user transparency and control top of mind.”

Translation: “We fucked up big time.”

A complete list of changes and clues on how to use Google Buzz went up Tuesday. Not one word on opting out is included, but apparently if you poke around you can find that, too. We couldn’t.