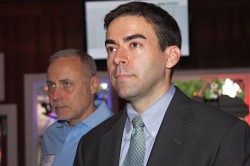 State Rep. Mike Jacobs, a Democrat turned Republican who supports LGBT issues, worked Tuesday to remind gay voters that he’s been there for them in the hopes that they will turn out for him on Election Day in November.

Jacobs (top photo) pitched his gay creds to about 50 people during an LGBT reception at Cowtippers, an event boasting a host committee of influential gay politicos and activists. It was a decidedly bipartisan affair that came in a week when Jacobs also fully supported a decision from District Court Judge Virginia Phillips overturning the military’s ban on openly gay members.

“It means a lot to have support from the LGBT community,” Jacobs told the crowd. “I want you to know that I do stand for you, for equality and for you to be treated with dignity under the law. The bottom line is that we all pay taxes here, we are all citizens, we are all contributing members of society and most importantly, we are all human. At the end of the day, all levels of government should be treating you exactly the same as everyone else in society.” 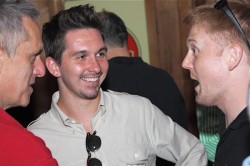 Jacobs’ enjoys LGBT political support thanks to his record in the Georgia General Assembly. Earlier this year, he helped pass legislation boosting the state’s anti-bullying law, which was a top priority for Georgia Equality. It also didn’t hurt that Jacobs slapped down his party’s gubernatorial nominees for their anti-gay rhetoric earlier this summer.

Georgia Equality honored Jacobs for his work on the bullying legislation with its inaugural Allen Thornell Political Advancement Award during Evening for Equality in June. Jacobs also spoke at an AID Atlanta fundraiser in May that helped the group raise more than $12,000. 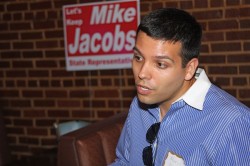 “I applaud the recent U.S. District Court decision striking down the federal government’s ‘don’t ask, don’t tell’ policy. This is another step toward giving true meaning to the freedoms embodied in the Bill of Rights and making the government treat LGBT citizens with equality and dignity. I especially want to congratulate my friend and campaign treasurer Jamie Ensley for his testimony in the case. As the District Court’s decision states: ‘The Court found Ensley to be a candid and credible witness.’ I couldn’t agree more.”

Jacobs faces Democrat Sandy Murray in the November election for the District 80 seat and members of the gay political group that endorsed her, Atlanta Stonewall Democrats, were on hand at Jacobs’ event Tuesday. The lawmaker reaffirmed his support for same-sex marriage, which Murray also supports.