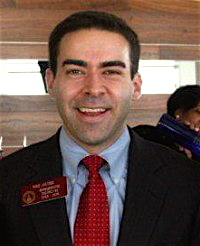 While Georgia’s two GOP candidates for governor denounced the Prop. 8 ruling on Wednesday, gay-friendly Republican state Rep. Mike Jacobs called on them to “cut out the gay bashing.”

Now that’s not likely to land him an invite to Sarah Palin’s stop in Buckhead on Monday. But Jacobs, a former Democrat turned Republican who represents District 80 in DeKalb County, took to Facebook to criticize his party’s leaders for their comments in the wake of a federal judge’s ruling on Wednesday that struck down California’s voter-approved ban on gay marriage.

Wishes the GOP candidates for Governor would cut out the gay bashing. They pay taxes, too, and Georgia has bigger issues to address than this non-issue.

The comment drew “amens” from a handful of LGBT activists, including Georgia Equality’s Jeff Graham and Kathy Kelly from MEGA Family Project. Even Liz Carter, a Republican running for Congress in DeKalb’s 4th District added a “Like” and then offered this comment: “Mike is correct!”

Jacobs’ reaction came Thursday, a day after Karen Handel and Nathan Deal lashed out at the Prop. 8 ruling. The two face off Tuesday in the GOP primary. Handel complained about “liberal judges subverting the will of the people.” Deal said the ruling “undermines the credibility of the judicial system and outrages Georgians in both parties.”

Roy Barnes, the former Democratic governor hoping to recapture the post, didn’t comment on the ruling, but did take the opportunity to add that he believes marriage “is between a man and a woman” and is not in favor of changing state law, which bans same-sex marriage.

Jacobs helped pass legislation earlier this year that toughened the state’s anti-bullying laws, an effort that Georgia Equality had cited as one of its legislative priorities. For that work, the group honored him with its inaugural Allen Thornell Political Advancement Award during Evening for Equality in June.

Jacobs also spoke at an AID Atlanta fundraiser in May that helped the group raise more than $12,000.

Jacobs faces Democrat Sandy Murray in the November election. Both have said they support same-sex marriage. 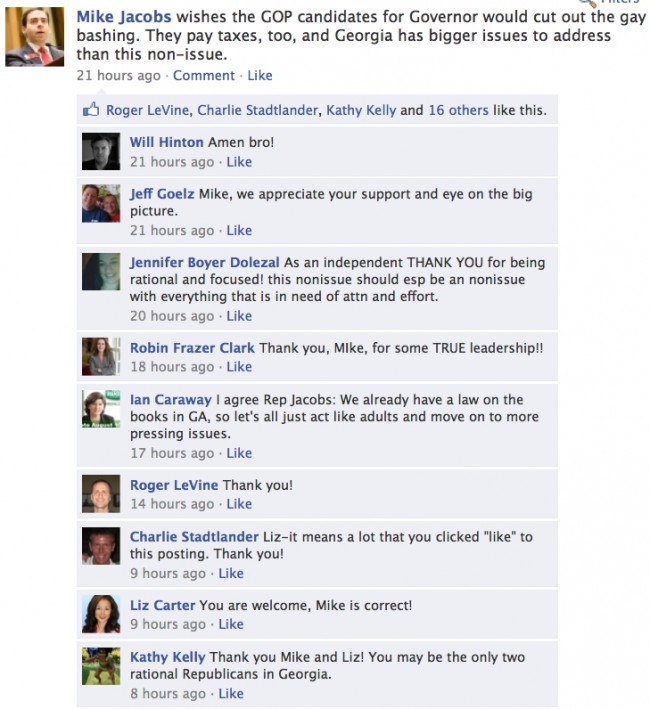