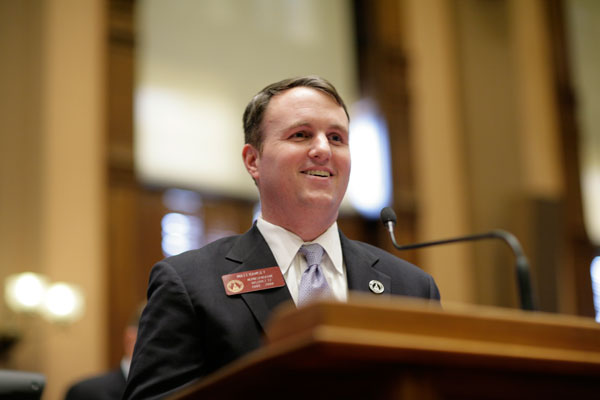 “I’m not surprised,” Drenner, who is gay, said. “I’m disappointed.” The House approves multiple privileged resolutions every day. They typically congratulate constituents, offer condolences for a death or commend someone for service to the state. Ramsey said members of the GOP caucus had questions about the resolution and so he asked that consideration of it wait a day.

Ramsey was coy when asked if the resolution would eventually come up for a vote. The state lawmaker earned the scorn of LGBT activists in 2011 for backing the state's newly-minted immigration laws. When it comes to resolutions honoring anything LGBT, Georgia lawmakers prefer them on the down low. In March 2012, the House rejected a resolution from Rep. Keisha Waites commending the Lambda Alliance at the University of Georgia that included "gay." But offer a resolution commending Matthew Cardinale, the gay editor of Atlanta Progressive News, and another for Mitzi Bickers, a lesbian and former Atlanta School Board chair who now works for Mayor Kasim Reed, and those measures from Waites passed. Without a legislative scuffle. Then again, there's no mention of "gay" in those. In 2011, Drenner offered a resolution praising Cathy Woolard. It passed. Why? Even though Woolard was the first lesbian elected to the Atlanta City Council and as its president, and serves as the lobbyist for Georgia Equality at the Gold Dome, it didn’t mention that she’s gay. On Saturday, Atlanta Freedom Bands presents its Celtic celebration Emerald Isles at Duid Hills United Methodist Church. UPDATE: Cliff Norris, president of Atlanta Freedom Bands, tells us that Ramsey dropped his opposition to the resolution on Friday and the measure passed the House with unanimous consent. Photo via