God-Des & She set to rock Bellissima on Friday 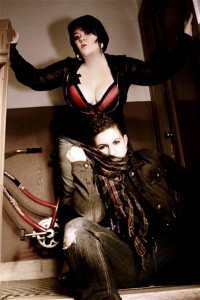 A stint on “The L Word” made their song “Lick It” a lesbian anthem. But the hip-hop/soul duo God-Des & She were bucking conventions long before then, and they’re sure to keep it up for their rabid fan base during a return engagement in Atlanta.

“You don’t want to miss this awesome show,” says Anna Ragghianti, owner of Bellissima, which hosts the live performance on Friday.

“While most aspiring rappers try to set the bar, God-Des & She are the bar,” says a rave review in GO NYC, a lesbian entertainment magazine.

In other words, rather than conforming to a specific genre, the pair—hard-edged rapper God-Des (photo, front) and soulful, full-voiced crooner She (left)—create their own. When you hear a God-des & She song, you know it is them. It’s rap, but it’s seamlessly fused with rock, pop and soul that makes God-Des & She music their own.

And the ladies love them for it—well, that and their obvious sex appeal. Like their combination of musical styles that blend so well together, their visual mix of soft and hard also provides a little eye candy for every female fan.

Friday’s show is a return engagement after an incredibly well received appearance on the Atlanta Pride stage in November. Butchies and girlies were pressed to the stage to get an optimal view.

God-Des was already making a name for herself as a rapper in Madison, Wisc., when she hooked up—musically—with She in 1999. When they first riffed together, “it was as if we were one person, one mind, one past—and, as it turned out, one future,” writes She on their website.

Combining God-Des’ irreverent rhymes with She’s soaring voice, they created shimmering, irresistible tracks which were soon captivating crowds. They moved to New York in 2004 and began pounding the pavement and honing their art while holding down odd jobs.

“We had some hard times,” She says, “and a number of times we thought about giving up. The only thing that kept us going was knowing our music meant something extremely special to our fans.”

In 2007, the now-infamous “L Word” single prompted album sales that they’re still enjoying—30,000 and counting—for their first two albums, as well as a No. 1 slot for their single “Love You Better” on MTV/LOGO’s chart for 15 weeks. The pair now tours the world, from small venues in Podunk to large stages in exotic locales like Stockholm.

Friday’s Bellissima show will feature their third album, appropriately titled “Three,” which released in December. The tracks were produced by Brian Hargroove of Public Enemy fame. Critics are saying his belief in the duo portends the transistion of God-Des & She from underground faves to pop culture phenomenons.

“They are easily as good as the best that hip hop has to offer,” Hardgroove tells Curve magazine, “and far more interesting.”

While working on “Three,” God-Des and She discovered that they not only continue to fly in the face of convention but evolve while doing it.

“We went from a duo where the rapper rapped all the verses and the singer sang all the hooks, to totally infusing our styles and doing songs that are nearly impossible to define and place in any musical box,” She says on the band’s website.

“This is our best album yet. It takes all the strengths we’ve been honing over the years and puts them together to create something new.”

They call the new album is a genre-straddling tour-de-force, and promise that their current tour that the pair is taking what loyal fans love and taking it to a whole new level.

Can Atlanta can handle all that? Sure you can.