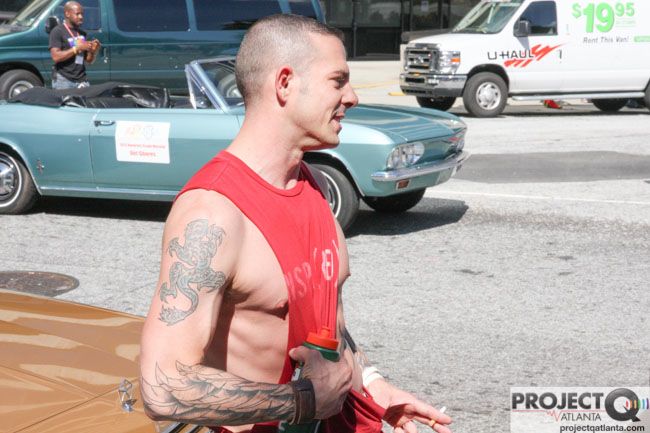 The attorneys for a go-go dancer at BJ Roosters say he was fired as retaliation for joining a federal lawsuit demanding minimum wage in a legal fight that could swell to include 300 current and former dancers at the popular gay bar.

So attorneys for Jeremy Sheffield filed an emergency motion on Wednesday asking U.S. District Judge Richard Story to grant a temporary restraining order and to reinstate Sheffield's employment at the bar, where he's worked since 2009.

“The purpose of this conduct was for the sole purpose of retaliating against Sheffield and intimidating Defendants’ other employees to discourage them from participating in this action. Defendants have further threatened to file disparaging and false 1099 forms with the Internal Revenue Service against Sheffield and any other employee–dancer who chooses to join this collective action,” attorney Anthony Collins says in the motion.

A hearing is scheduled for Feb. 20.

On Nov. 13, Charles Allen (photo) – a go-go dancer at the club from December 2012 to August 2013 – sued BJ Roosters alleging that he is owed minimum wage for his work at the club. He sued to receive unpaid wages for past work and damages for “all unpaid wages, illegal  kickback payments, interest, attorney’s fees and costs and all other  allowed forms of relief.” At least nine other dancers at the bar joined the lawsuit in mid January.

About the same time, Sheffield contacted attorneys involved in the case and told them that although he wanted to join the lawsuit, he feared he would be fired, according to the emergency motion.

Sheffield’s fear of retaliation was well-founded, according to the lawsuit:

Days earlier, on January 8, 2014, Defendant Robert Hamill had told Sheffield “that he and Molinari ha[d] been collecting names of dancers who join the lawsuit and that they intend to . . . file false disparaging information with the Internal Revenue Service against all dancers who join the lawsuit.” In the same conversation, Hamill also told Sheffield “that only the lawyers would actually make any money off of the dancers’ lawsuit, and that the dancers who previously sued the Atlanta strip club Onyx in a collective action ended up owing the Internal Revenue Service the entire amount of their settlement awards, plus an additional $6,000 each.” Hamill has told the same thing to numerous other current dancers at BJ Roosters in an attempt to intimidate them and discourage them from joining this action.

When Sheffield arrived for his shift on Jan. 19, he was approached by co-owner John Molinari between shifts. He was told that the club reclassified dancers as employees instead of independent contractors and that they would be paid $2.13 per hour, plus tips, according to the lawsuit. Sheffield was then asked to sign a document agreeing that he would not sue BJ Roosters and would settle any legal claims in arbitration.

Sheffield refused to sign the document, according to the motion, and was then fired. He joined the lawsuit the next day.

“As attested to by Sheffield in his Affidavit, his employment at BJ Roosters is his sole source of income. He has already lost significant income from his missed shift, and will lose much more if not reinstated immediately. His termination from BJ Roosters will soon cause him enormous financial hardship, including rendering him unable to make child support payments,” according to the emergency motion.

“In short, there is no non-discriminatory and non-retaliatory basis for his termination,” according to the motion.

Attorneys suing the club are asking Story to order BJ Roosters to notify dancers that Sheffield “was terminated illegally and in retaliation for legally protected actions,” reinstate Sheffield, and end any communication with dancers about the case.

The lawsuit against BJ Roosters was filed Nov. 13, the same day a similar measure was filed against Swinging Richards in a suit that has grown to include nearly 30 strippers. Both lawsuits claim that dancers should be classified as employees, not independent contractors, and should be paid minimum wage plus tips as required by the Fair Labor Standards Act. The lawsuits also argue that the dancers shouldn't have to pay a nightly house fee or other kickbacks to the bars or DJs. The BJ's suit claims that as many as 300 former and current dancers could be impacted.

Bobby Hamill, a BJ's co-owner, told WSB that the bar has done nothing wrong.

“BJ Roosters is a properly licensed bar and restaurant that provides food, drink, and entertainment to its patrons. It is emphatically not a “strip club.” DJs provide music, and dancers perform in costumes, which they do not remove.  Roosters believes every aspect of its business, including its employment practices and policies, complies with all relevant laws.”

In a response filed Jan. 14, attorneys for the gay bar denied the allegations in the lawsuit and say it has not violated the Fair Labor Standards Act. The bar argues that its dancers are independent contractors.

BJ Roosters has not yet filed a response to the motion seeking a temporary restraining order and Sheffield's reinstatement.