GlitterBomb! ATL puts the queer into May Day 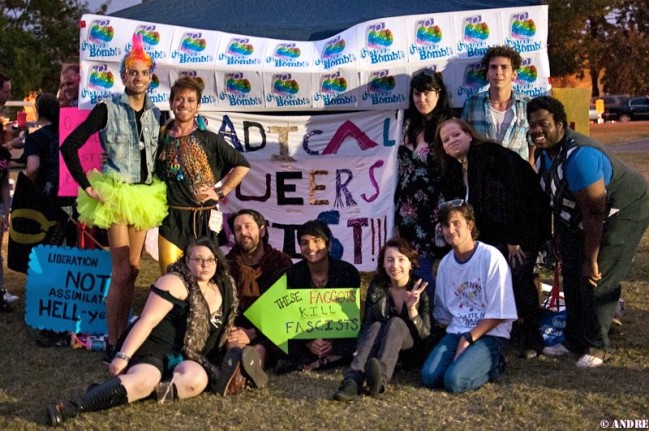 The radical queers of GlitterBomb! ATL are back just in time for May Day. On Tuesday, the social justice group adds some grassroots sparkle to Georgia Latinos for Human Rights’ May Day Rally and the May Day Festival.

Later, members of GlitterBomb! aligned itself with Native American groups to lead the Facebook shitstorm against the Bedlam partiers for what GlitterBomb considered the politically incorrect and racially insensitive naming of Bedlam’s Thanksgiving-time PocaHotAss party.

A series of happenings at Tuesday events welcomes all comers to celebrate queerness, rally the troops, and learn GlitterBomb’s mission of inclusion and visibility. Arm yourself with love, glitter and a little social indignation. Be sure to check out their Facebook page, and consider the group’s May Day participation as GlitterBomb! ATL’s second coming out. Here’s their pitch:

GlitterBomb! is excited to make it’s second official debut next week on Tuesday, May 1st. May Day is here, and we queers are invested in this international movement. May Day is a movement structured around fighting for workers rights and labor unions. Queers are an integral part of the workers rights movement—we must return to true gay liberation and recognize community struggles through inclusivity.

GlitterBomb! says that because queers are denied rights not limited to unjust employment discrimination and termination, but we are a crucial part of all movements that challenge all hegemonic structures. GlitterBomb! is proud to bring a queer contingent to the already fabulous Georgia Latino Alliance for Human Rights (GLAHR), “May Day Rally”, as well as to the “May Day Festival” in Coan Park.

The Georgia Latino Alliance for Human Rights has organized a dynamic rally to support workers and unions, end E-verify and unjust deportations, and to fight racism in the new Jim Crow era. GlitterBomb! is proud to provide queer visibility at this rally—working towards the fulfilling the need for queer solidarity across all intersections of marginalization.

In addition, GlitterBomb! is geared up to join an anti-capitalist May Day Festival Coan Park. The festival is dedicated to providing workshops, a free market, and free food to fight against capitalism.

As part of this festival, we will be conducting a workshop on how homophobia affects the radical leftist movement. Through grassroots education, we aim to spread the queer gospel of intersectionality, queer visibility, and recognizing the importance of queer solidarity.

GlitterBomb! is ready for more people to join! Come out queers!