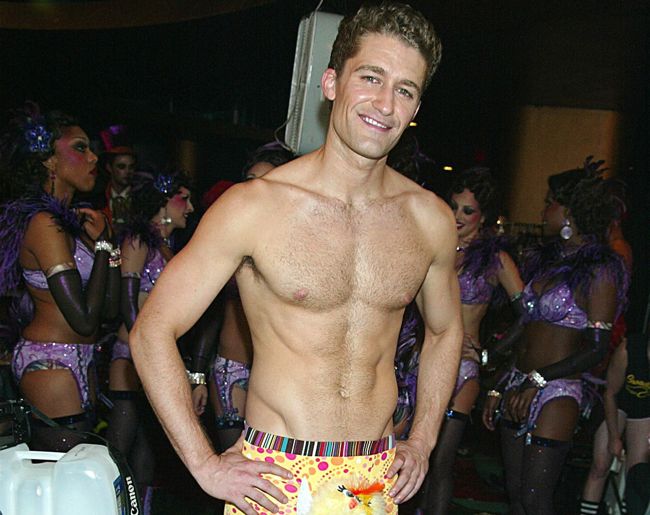 "Glee" actor Matthew Morrison -- yes, the one with those abs -- will be honored next month in gay Atlanta during the Human Right Campaign's gala dinner fundraiser for his support of LGBT issues. And to pimp his new album, which drops a few weeks later. “We recognize Matthew Morrison, a star in music, theatre, and television, for his public commitment to LGBT equality, and in particular to LGBT young people,” HRC President Chad Griffin says in a prepared statement released Monday. “We are proud to honor him with the Ally for Equality Award and thank him for standing up for LGBT people everywhere.” Morrison performed in Atlanta in June 2011 during a tour promoting his self-titled album that included a duet with part-time Atlantans Elton John. This time, he'll be in town on May 4 for HRC Atlanta's 26th annual dinner and auction picking up his award and promoting "Where It All Began," his new album out June 4. Morrison will receive HRC's Ally for Equality Award for stuff like this:

This year HRC will honor Matthew Morrison with its Ally for Equality Award for his outspoken support of equality for the LGBT community. Each week millions of Americans, including LGBT young people, tune in to see Morrison on the Fox hit series, Glee. Morrison, who is also a star of stage and the recording industry, has used his platform to publicly support LGBT equality. He played Prop. 8 plaintiff Paul Katami in the west coast premiere of Dustin Lance Black's play, 8, in 2012. The Ally for Equality Award recognizes the outstanding efforts of those who dedicate time, energy, spirit and whole-hearted commitment to better the lives of LGBT people. This award is given to allies outside the LGBT community who stand up on behalf of equality for all Americans. Morrison, an Emmy-, Tony-, and Golden Globe-nominated star, who made his debut on Broadway in “Footloose,” followed by “The Rocky Horror Picture Show,” “Hairspray,” and “The Light In The Piazza,” is set to release a new studio album, Where It All Began, on June 4, 2013. The album is a collection of classic standards, many of which were first made famous in Broadway musicals. Morrison released his first album in 2011, a pop collection of mainly originals featuring such guests as Elton John, Sting and Gwyneth Paltrow.

Morrison will join local award winners, along with some expert bowlers and cocktailers. Those abs won't hurt ticket sales, either.