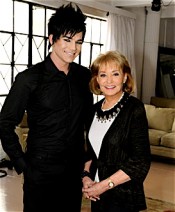 It’s easier than a crack whore on Ponce to guess who’s on Barbara WaWa’s annual “Most Fascinating People” special. This year’s “Who You’re Most Sick Of” includes Adam Lambert.

Whether ABC is really boycotting Adam Lambert (top photo, with Walters) for his raunchy performance on the American Music Awards, or simply enjoying the publicity as much as he is, the network’s Grande Dame gets what she wants. Just ask Rosie O’Donnell, Star Jones, and Walters’ current crop of couched slaves on “The View.”

They’re scared of Barbara Walters. And seriously, who wouldn’t be (middle photos)?

If Matriarch Dearest wants a TV Special, Matriarch Dearest gets a TV special, and she dictates the terms. That’s the spoils of being a legend—and a bankable ratings booster. We kid–kind of. Walters has earned her place, if not her highly publicized attitude.

So it comes as little surprise that after ABC banned Lambert from “Good Morning America” and canceled his appearances on “The Jimmy Kimmel Show” Dec. 17 and “New Year’s Rockin’ Eve” on Dec. 31, Walters doesn’t give a shit: Lambert will be in one of her special’s hot seats when the show airs on Dec. 9 on—that’s right–ABC.

No, it’s not because ABC is dodging accusations of homophobia in the matter and Walters just wants to do the right thing. It’s because she—and clearly so do ABC’s execs–know people will watch. Say it with us: cha-CHING!

The cat’s already out of the bag on how the Lambert interview will go: on commercial previews, Walters asks Lambert if he’s sorry about his AMA performance, and he gives her a resounding, indignant “No.”

Let’s talk about the “Most Fascinating People” for a minute. While it’s beyond us why they haven’t renamed it, it’s actually a predictable corral of each year’s “Most Overexposed People,” and everybody knows it.

Oh, but there’s a “surprise”! Barbara keeps her number one “most fascinating” to herself until the show airs.

Easy Prediction #1: If it’s not Taylor Swift, we’ll eat our hats. Again, since Barbara’s not-so-special special is an annual contest of overexposure, the teen sweetheart (she turns 20 this month) wins, hands down.

Adam Lambert overexposed? Ahem. Yes, we’ve admittedly been part of the problem, with 26 headlines and counting about Lambert this year. We just can’t help ourselves! And neither can you, according to the hits those stories get. 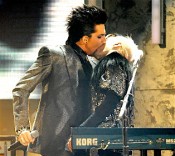 Lambert’s AMA performance aired live at 10:54 p.m. Eastern, 10:54 p.m Central, and was edited out of the show’s West Coast run two hours later, which aired there at 09:54 p.m. local time. Not to mention that Jimmy Kimmel broadcasts way beyond the restricted timeframe, as does “New Year’s Rockin’ Eve.”

So yeah, but whatever. CBS, NBC and the syndicates are picking up the slack, putting Lambert on Leno, Ellen, “The Morning Show,” and just about anywhere else he can plug his huge-selling debut album.

Everybody wins in the publicity game: Adam sells millions, and ABC gets to call Check Mate when their hypocritical interview with him gets ratings despite their “protests” against him. And this just in: Lambert will be on ABC’s “The View” on Thursday, Dec. 10. So the ban-no ban continues to mutual benefit.

Easy Prediction #2: A Lambert-Elizabeth Hasselbeck “View” showdown. It’s as inevitable as the attention-getting Hasselbeck sparring match against Portia de Rossi just last week, and her legendary head-to-heads with Kathy Griffin and Sandra Bernhard on the show. Hey, this shit sells, and YouTube gets a piece of the action, too.

Much worse than ABC glomming onto Adam’s publicity train is what’s up at the Gay & Lesbian Alliance Against Defamation. In their “LGBT media watchdog role,” they came out swinging on the Lambert controversy. Not.

In a press statement released last week, GLAAD (tardy as hell to the party) actually backs ABC’s decision to yank Lambert entirely from the network, saying ABC has been LGBT inclusive in the past.

OK, but what have you done for us lately, ABC? Inclusion is an ongoing process…

But we really don’t care. This just proves how spineless the organization has become. For years, it’s been clear that GLAAD is more interested in protecting its future relationships with the bigwigs than fighting for equal time on the airwaves.

And finally in Glambert news, the Boy Wonder appears to be moving toward his next career builder. He dishes about his meeting with Madonna in the Dec. 14 issue of People magazine.

“Madonna told me, ‘Keep your eyes on the prize.’ I was at her house in New York. It was intimidating. Her son David answered the door. I thought, ‘This is so surreal.’ When we talked about singing together, she said, ‘I’m really bossy in the studio. I’ll piss you off.’ I said, ‘If you piss me off, we’d probably make good art.’ We bantered. She was cool.”

Easy Prediction #3: Duet! While the product of the potential Glambert-Madge collaboration is sure to be oh-so gay and oh-so suitable for dance floors, we wonder if ABC will air it at the 2010 AMAs and feign disgust afterwards. If it happens, don’t say we didn’t warn you.